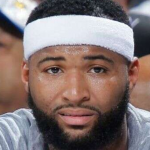 DeMarcus Amir Cousins famed as DeMarcus Cousins is a famous American professional basketball player who has been playing basketball since his high school. He is playing for the Los Angeles Lakers of the National Basketball Association (NBA). He is nicknamed as Boogie. His playing position is Center. He played college basketball for the Kentucky Wildcats, where he was an All-American in 2010. He left Kentucky after one season and was selected with the fifth overall pick in the 2010 NBA draft by the Sacramento Kings. Overall, he is a very talented basketball player.

The Los Angeles Lakers might turn to one of their former players to fill the hole left by the potentially season-ending injury to center DeMarcus Cousins. Center Dwight Howard, who spent one season with the Lakers in 2012-13, is expected to have his contract bought out by the Memphis Grizzlies and has a mutual interest in returning to LA. Howard averaged 17.1 points and 12.4 rebounds for the Lakers that season, but they finished 45-37 and were swept by the San Antonio Spurs in the first round of the playoffs. Heading into his 16th season, Howard, 33, is coming off a shortened season in which he only played nine games for the Washington Wizards due to back surgery and injuries. But he missed just 20 games over the three previous seasons and holds career averages of 17.4 points, 12.6 rebounds and 2.0 blocks per game. Cousins suffered a torn ACL in his left knee during a workout in Las Vegas, meaning the four-time All-Star’s entire 2019-20 season is in jeopardy, considering his recent injury history and the typical nine-month recovery window. Cousins, 29, signed a one-year deal with the Lakers in free agency after a season with the Golden State Warriors. He missed the first half of the 2018-19 season as he recovered from a torn Achilles. In nine NBA seasons, Cousins has averaged 21.2 points and 10.9 rebounds per game. Joining the Lakers on a $3.5m pact reunited Cousins with former New Orleans Pelicans teammate Anthony Davis. The Lakers reportedly also are interested in free-agent veteran Joakim Noah as they look to avoid playing Davis at the center.

DeMarcus Cousins was born on 13th August 1990 in Mobile, Alabama as DeMarcus Amir Cousins. He is of African-American ethnicity and has an American nationality. He is the son of Monique (Mother) and Jessie Cousins (Father). He has four sisters and one brother Jaleel, who is also a basketball player. For his schooling, he joined LeFlore Magnet High School in Mobile, Alabama and joined Kentucky College in 2009. His religion is Christian. As of 2019, he celebrated his 29th birthday. His other early life information will be added soon.

DeMarcus is a very handsome person with an athletic body build. He has got a very charming smile on his lips attracting a lot of people towards him. He has a height of 6 feet 11 inches. His body weighs 122 Kg. He has black hair and dark brown eyes. His other body measurements will be added soon.

Net Worth of DeMarcus Cousins

DeMarcus is a very successful basketball player and his career has paid him a lot of fortune. His salary is around $16.96 million. His net worth is estimated to be $15 million as of 2019. Overall, he is satisfied with his earnings.

DeMarcus Cousins is neither married nor single but he is in a relationship. He is dating Christy West, who is also known as baby mama by NBA players. They are college sweethearts. He has one son, Amir and a daughter, Vana. But it is not known that Christy is the mother of his children. As of now, the couple is living happily without any sign or rumors of the separation. They are enjoying their life a lot and they are planning to get married soon.