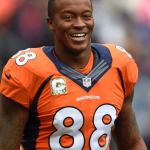 Demaryius Thomas was an American former football wide receiver who had played in the National Football League (NFL) for ten seasons, primarily with the Denver Broncos before retiring on 28th June 2021. He had also played for the Houston Texans, New England Patriots, and New York Jets. He played college football for the Georgia Tech Yellow Jackets and was drafted by the Broncos in the first round of the 2010 NFL Draft. During his NFL debut at the time against the Seattle Seahawks, he had eight receptions for 97 yards and scored one touchdown. He also had a great season in 2011 with 32 receptions for 551 yards and four touchdowns. He made four Pro Bowls and won Super Bowl 50 against the Carolina Panthers playing with Denver. On 28th June 2021, he announced that he was retiring from professional football with 724 catches for 9,763 yards to go with 63 touchdowns. His shirt number was 88. As a child, he was given the nickname "Bay Bay" by his uncle in reference to the bad kids from the movie Bébé's Kids.

Former Denver Broncos wide receiver Demaryius Thomas dies at the age of 33 as per police. Roswell, Georgia, police said Thursday night that Thomas was found dead in his home. Preliminary reports, according to police, indicated Thomas' death might have resulted from a medical issue. LaTonya Bonseigneur, a first cousin who grew up with Thomas, so close they considered themselves siblings, told The Associated Press that the family believes he died from a seizure. "He had been suffering from seizures for over a year, and we believe he had a seizure when he was showering," Bonseigneur said early Friday. "We're not sure when he died. We just spoke with him yesterday." Former teammates also noted Thursday night that Thomas might have been having seizures in recent months. "We are devastated and completely heartbroken by the sudden, tragic passing of Demaryius Thomas," the Broncos said. "D.T. was beloved by our entire organization, his teammates and coaches, and our fans. Recently retiring as a Bronco, we were very much looking forward to celebrating Demaryius for years to come as one of the greatest players in franchise history." The Broncos added "Demaryius' humility, warmth, kindness and infectious smile will always be remembered by those who knew him and loved him." He played 10 seasons in the NFL and is considered one of the best wide receivers in Denver Broncos history.

Demaryius Thomas was found dead on 9th December 2021 at his home in Roswell, Georgia. He dies at 33. He had experienced health problems following a car crash in 2019, and police said that his death was attributed to a "medical issue".

What was Demaryius Thomas  Famous For? 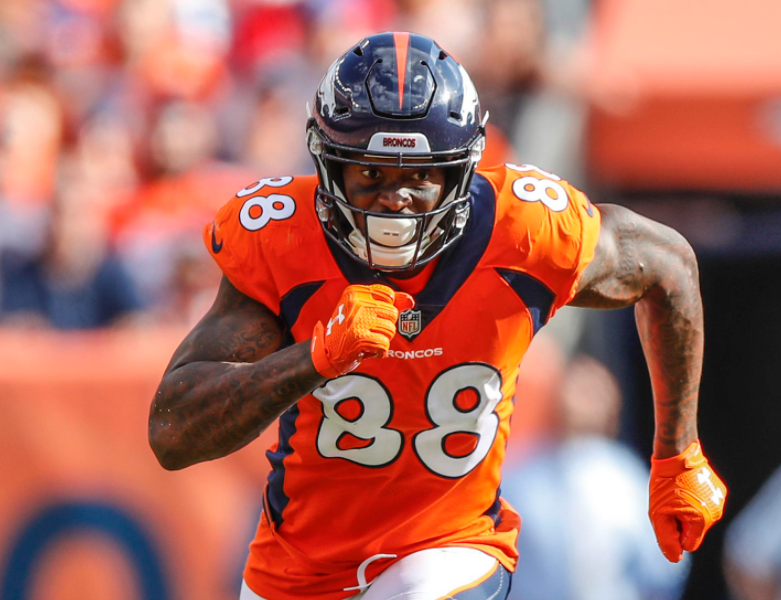 Who are the Parents of Demaryius Thomas? Know About His Nationality, Real Name, and Ethnicity

Demaryius Thomas was born with the real name of Demaryius Antwon Thomas on 25th December 1987. He was from Montrose, Georgia, USA. Born to Bobby Thomas (father) and Katina Smith (mother), he held American nationality and he was of Mixed ethnicity. His race was black. Lastly, he celebrated his 33rd birthday as of 2020. When he was a child, police raided the house where his mother and grandmother lived. His mother was sentenced to 20 years in prison, and his grandmother to life in prison, for crack cocaine distribution. He then grew up with his aunt and uncle after his mother was sent to prison. Later on 13th July 2015, his mother's sentence was commuted by President Barack Obama and was released at midnight on 11th November 2015. On 17th January 2016, his mom saw Demaryius Thomas playing football for the first time. Later, Obama commuted the sentence of Thomas' grandmother on 2nd August 2016. He was an evangelical Christian, and he frequently posted about his faith on his Twitter account. Capricorn was his Zodiac sign. He had two siblings; Tonecia Smith, Tyeshia Smith. 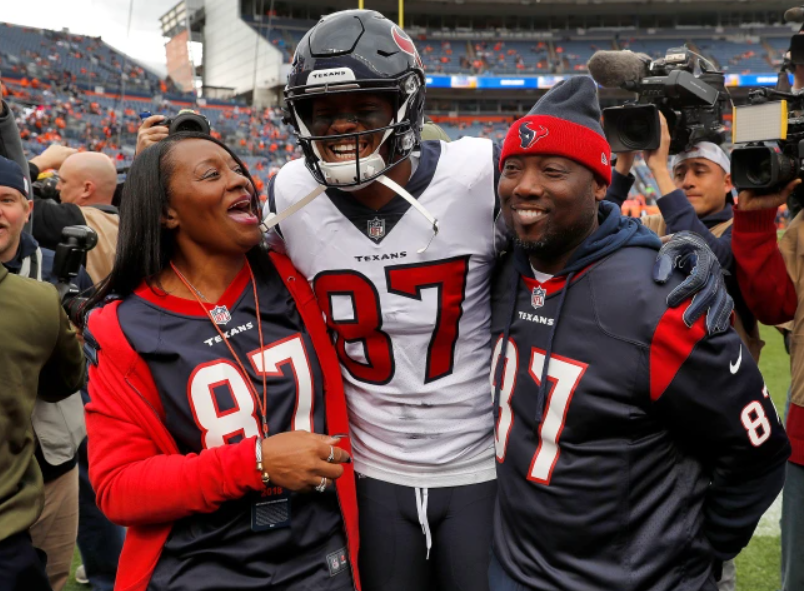 About his education, he attended West Laurens High School in Dexter, Georgia, where he was a three-sport star in basketball, football, and track. There, he played wide receiver for the Raiders football team. He recorded 32 receptions for 330 yards and three touchdowns as a junior in 2004. Further,he was named an all-region and all-Heart of Georgia player. He recorded 82 receptions for 1,234 yards and ten touchdowns as a senior. Later, he received scholarship offers from Duke, Georgia, and Georgia Tech. He chose to attend the Georgia Institute of Technology, where he majored in management and played for the team. The Sporting News named Thomas to its freshman All-Atlantic Coast Conference (ACC) first team and a freshman All-America honorable mention. He sat out the 2006 season as a redshirt freshman. He made his collegiate debut in the 33–3 victory over Notre Dame, recording a single reception for nine yards. He scored his first collegiate touchdown on a 56-yard pass from Taylor Bennett in the Yellow Jackets' fourth game against Virginia. He saw action in all 13 games including 10 starts and recorded 35 receptions for 558 yards in his 2007 season. In his next season, he recorded 39 receptions for 627 yards and three touchdowns as the leading receiver. He started his senior season against Jacksonville State in a 37–17 victory. Later, he played in the game against Iowa but did not record any statistics in his final collegiate game. He had a breakout season with 46 receptions for 1,154 yards and eight touchdowns in his 2009 season during his redshirt junior year and finished his collegiate career with 120 catches for a conference-leading 2,339 yards and 14 touchdowns. On 8th January 2010, he declared for 2010. 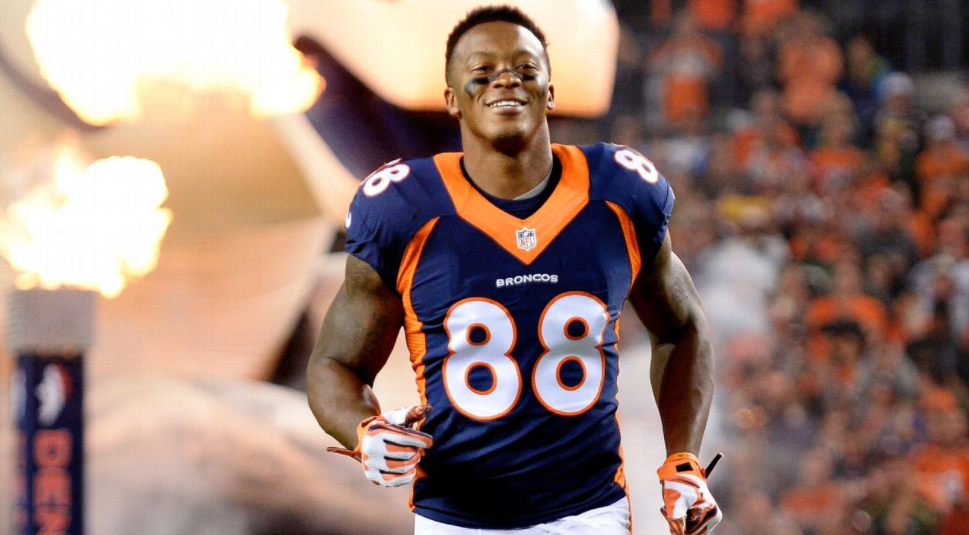 Demaryius Thomas Girlfriend: Who was he dating?

Demaryius Thomas was not a married man but he was is in a relationship prior to his death. He was dating his girlfriend, Surina. His long-term love, Surina is a wardrobe designer by profession. It is not clear if the pair were together at the time of Thomas' death. Over the years, Surina has been spotted at Denver Broncos games and celebrations. The pair have appeared in a number of photos together. Surina has been spotted wearing Denver Bronco merch at what appears to be a private party for the team. More information about their relationship details is still to get revealed yet. Thomas had no children from his relationship. His sexual orientation was straight and he was not gay. 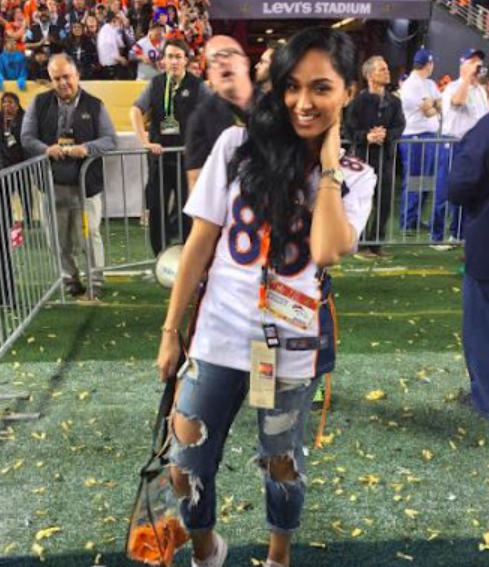 How much was Demaryius Thomas Net Worth and Salary?

Demaryius Thomas was an American footballer whose net worth was estimated to have $9.5 Million as of 2021. He reportedly received an annual salary of $3.5 million while at Denver Broncos. His source of income was from his football career. He was living a standard lifestyle before his demise. There are no details regarding his endorsement deals and sponsorships.

Demaryius Thomas was a handsome man with an athletic body build. He had a height of 6 feet 3 inches with a bodyweight of 102 kg or 225 lbs. He had a pair of dark brown eyes and his hair color was black. His shoe size was 9 US. His other body measurements detail is still to get unfolded yet. He had a tattoo of a portrait of Jesus on his left arm bearing the phrase "Jesus Saves".

Trivias About Demaryius Thomas You Need To Know.