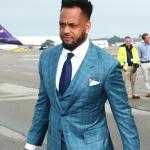 Derrick O'Hara Johnson, professionally known as Derrick Johnson is a former American football linebacker. He was drafted by the Kansas City Chiefs with the 15th overall pick in the first round of 2005 NFL Draft. He played 13 seasons for the Chiefs making 4 Pro Bowls. He then played a season for the Oakland Raiders. He recorded 1,169 tackles, 27.5 sacks, 23 forced fumbles, 14 interceptions, and 4 defensive touchdowns in his entire NFL career. He played college football at the University of Texas at Austin. 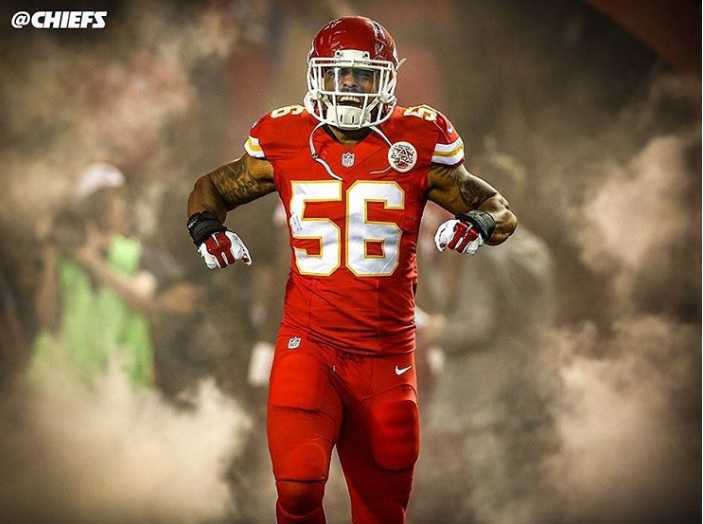 What is Derrick Johnson Famous For?

- Made 4 Pro Bowls with the Chiefs.

Where was Derrick Johnson Born?

Derrick Johnson was born on 22 November 1982. His birth name is Derrick O'Hara Johnson. His birth place is in Waco, Texas in the United States. He holds American nationality.

He attended Waco High School. He was a three-sport star in football, track, and basketball.

He posted 170 tackles, 21.0 stops for loss, 6.0 quarterback sacks, five forced fumbles and two interceptions, including one returned for a touchdown as a senior. He also produced a career-high 30 tackles and four forced fumbles in a single game. He also earned Parade magazine high school All-America and first-team All-Texas Class 5A honors following both his junior and senior seasons. He also played in the first-ever U.S. Army All-American Bowl in December 2000.

He was a state qualifier in the 100-meters and the triple jump as a standout track & field athlete. He recorded a 10.5-second 100-meter dash and cleared over 48 feet in the triple jump. He ran a leg on the Waco 4*100 m relay squad at the District 13-5A Championships.

He committed to play with Texas Longhorns football at the University of Texas at Austin. He became one of the most dominant linebackers in Longhorns history.

He was recognized as the Big 12 Defensive Player of the Year following his senior season. He also received the Dick Butkus Award and Bronko Nagurski Trophy. The Texas Longhorns defeated the Michigan Wolverines in the 2005 Rose Bowl.

Kansas City Chiefs selected Johnson in the first round with 15th overall pick of the 2005 NFL Draft. He was the fourth linebacker drafted in 2005.

He signed a five-year deal with the City Chiefs in July 2005 worth $10.40 million including $7.03 million guaranteed.

He made his professional NFL debut against the New York Jets, where he recorded nine combined tackles, forced a fumble, and his first career sack.

He was awarded the Mack Lee Hill Award as their rookie of the year.

He started all 16 games in the 2007 season. He recorded 94 combined tackles with 63 solos, six pass deflections, four sacks, and three forced fumbles.

He posted 85 combined tackles with 68 solos, six passes defensed, four forced fumbles, 1.5 sacks, and an interception in 14 games and 14 starts in the 2008 season.

He was limited to three starts in 15 games in the 2009 season. He posted 37 combined tackles with 30 solos, five pass deflections, three interceptions, two touchdowns, a sack, and a forced fumble.

He started all 16 games in the 2010 season and recorded 121 combined tackles with 95 solo, a career-high 16 pass deflections, four forced fumbles, one sack, an interception, and a touchdown.

Johnson played his first career playoff game in January 2011 when the Kansas City Chiefs finished first in the AFC West with a 10-6 record.

He started in all 16 games in the 2011 season and made a career-high 131 combined tackles with 104 solos, nine pass deflections, two sacks, two interceptions, and a forced fumble.

He was selected to his first Pro Bowl in 2012 Pro Bowl.

He started in all 16 games in the 2012 season. He recorded 125 combined tackles with 110 solos, four pass deflections, three forced fumbles, and two sacks. He marked his third consecutive season with over 100 combined tackles.

He started in all 16 games in the 2013 season. He recorded 107 combined tackles with 95 solos, six pass defensed, 4.5 sacks, and two interceptions.

He was selected as a later replacement for the 2014 Pro Bowl after San Francisco 49ers' NaVorro Bowman was unable to participate after ACL and MCL injury during the playoffs.

He tore his Achilles tendon in the Chiefs' 2014 season-opener against the Tennessee Titans. It was announced that he would miss the rest of the season. He was placed on injured reserve for the remainder of the season. He earned an overall grade of 93.4.

He started in all 16 games in the 2015 season recording 116 combined tackles with 95 solos, eight pass deflections, four sacks, and two forced fumbles, and two interceptions.

He was named to the 2016 Pro Bowl as a later replacement for Carolina Panthers' linebacker Luke Kuechly.

He extended his contract with the Chiefs in March 2016 signing a three-year deal worth $21 million including $9 million guaranteed.

He appeared in all 13 games making 13 starts in the 2016 season, where he recorded 90 combined tackles with 70 solo, three pass deflections, a sack, an interception, and a touchdown.

He recorded 71 combined tackles with 48 solo and 7 seven pass deflections in 15 games and 15 starts in the 2017 season. The Chiefs finished first in the AFC West with a 10-6.

He became a free agent in March after the Chiefs void his final year without penalty.

The Raiders released him in October 2018 at his request.

He retired on 8 May 2019 after signing a one-day ceremonial contract with the Chiefs.

Who is Derrick Johnson Married To?

Derrick Johnson is a married man. He is married to Tamika Johnson. The couple got married in 2009. He has 5 children.

How Tall is Derrick Johnson?

What is Derrick Johnson Net Worth?

Derrick Johnson is one of the decorated linebackers for the Kansas City Chiefs, where he played 13 seasons. He signed a one-year deal with the Oakland Raiders but was released by the Raiders in October 2018 at his request. He returned to the Chiefs signing a one-day ceremonial contract and retired on 8 May 2019. His net worth is not available at present.