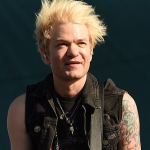 Deryck Jason Whibley, professionally known as Deryck Whibley is a Canadian musician, singer, songwriter, and record producer. He is well recognized for his work as the lead vocalist, rhythm guitarist, keyboardist, main songwriter, producer, founder, and only constant member of the rock band Sum 41. He started Sum 41 when he was in high school. He went on to produce music for other artists and work as a manager. Whibley is the only member to be still associated with the band since its inception. He has been part of many popular extended plays and albums released by "Sum 41," including "Half Hour Of Power", "All Killer No Filler", "Chuck", "Underclass Hero", and "Screaming Bloody Murder". Additionally, Deryck released a collaboration track with Simple Plan called "Ruin My Life" on 18th February 2022.

Where is Deryck Whibley from?

Deryck Whibley was born on 21st March 1980 with the real name of Deryck Jason Whibley in Scarborough, Ontario, Canada. He is of Canadian nationality and he came from Canadian-white ethnic background. Similarly, his religious belief is in the Christian religion and his race is white. Deryck has celebrated his 42nd birthday as of 2021 and as per his birthdate, his zodiac sign is Aries. He is the son of his mother, Michelle Whibley whereas his father's name has not been revealed yet. He grew up in a single-parent household.

What does Deryck Whibley do for a living?

Who is the lead singer of Sum 41 married to?

Deryck Whibley is a married man. He is married to model Ariana Cooper in Los Angeles on 30th August 2015. They have one child, Lydon Igby, born on 1st March 2020. Deryck previously tied a knot with fellow singer Avril Lavigne in 2006. The couple occasionally performed together and have spoken about their relationship in interviews. They began dating when Avril was 19 years old, after being friends since she was 17. The wedding was held on 15th July 2006. But, on 9th October 2009, after a little over three years of marriage Lavigne filed for divorce and the divorce was finalized on 16th November 2010. Concerning Whibley's sexual orientation, he is straight.

What is Deryck Whibley's net worth?

Deryck Whibley is a talented man who has a net worth of $6 million as of 2022 whereas he has also a handsome amount of salary which is around thousands of dollars per year. Deryck has established himself an identity already and he's also superbly ambitious and continues to work even harder to reach his set objectives. In addition, his major source of income is from his musician, singer, songwriter, and record producer career.

How tall is Deryck Whibley?

Deryck Whibley is 5 ft 7 in or 170 cm tall and his body weighs around 65 kg or 143.5 lbs. He has attractive blonde hair and hazel eyes color. He often tends to dye his hair light brown or dark brown. Deryck also has inked tattoos on his body. Moreover, his body build type is average.

Whibley also has chronic back pain due to a series of back injuries, starting with a slipped disc during a 2007 concert. After an MRI scan, it was revealed that he herniated a disc in his back for the fourteenth time. On 17th May 2014, Whibley announced that, a month earlier, he had been hospitalized for alcoholism with severe liver and kidney damage. He has remained sober since.

Trivias About Deryck Whibley You Need To Know.