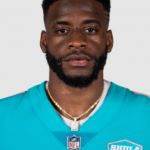 DeVante Parker is an American NFL wide receiver who plays for the  New England Patriots. Initially, he was drafted by the Miami Dolphins in the first round of the 2015 NFL Draft. He played college football at Louisville. As a true freshman in 2011, he appeared in 11 games; as a sophomore in 2012, he played in all 13 games and led the team with 744 receiving yards and 10 touchdowns on 40 receptions; as a junior in 2013, he played in 12 of 13 games and had 55 receptions for 885 yards and a school record-tying 12 touchdowns; as a senior in 2014, he missed the first seven games due to injury and played in six games only recording 43 receptions for 855 yards and five touchdowns. His 12 touchdowns as a junior in 2013 led the American Athletic Conference and were 10th most amongst the entire NCAA. He also competed in track and basketball for the school. His shirt number/jersey number is 11.

What is DeVante Parker Famous For?

Where is DeVante Parker From?

DeVante Parker took birth on 20th January 1993. He is from Louisville, Kentucky, the USA. He holds American nationality and his ethnic background is American-African. He celebrated his 29th birthday in 2022. About his parents, he was born to his mother, Raneca Parker, and his father, Anthony Shelman (former Louisville running back). Aquarius is his zodiac sign and he follows the Christianity religion.

About his educational qualification, he attended Ballard High School in Louisville, Kentucky, where he was a three-sport star in football, track, and basketball. He totaled 73 catches for 1,438 yards and 12 touchdowns as a junior. He recorded 68 passes for 1,793 yards (26.4 yards a catch) and 19 touchdowns as a senior. He finished his career as one of the state's all-time leading wide receivers with 3,274 yards, which ranks fifth. In track & field, he lettered all four years for the Bruins competing as a sprinter. At the 2011 Class 3A Region 4 Championship, he posted a career-best time of 22.57 seconds in the 200-meter dash, placing 3rd, while also helping his 4x100 relay rank top in the state until defeated by rival Louisville Eastern High School at regionals and 4x200 relay squad placed first. He was rated as the 26th-best wide receiver in the nation by Scout.com. He then chose Louisville over scholarship offers from Kentucky, Indiana, and UCF. As a true freshman in 2011, he appeared in 11 games. As a sophomore in 2012, he played in all 13 games and led the team with 744 receiving yards and 10 touchdowns on 40 receptions. As a junior in 2013, he played in 12 of 13 games and had 55 receptions for 885 yards and a school record-tying 12 touchdowns. He had a season-high 134 yards receiving on five receptions and a pair of touchdowns against EKU. He missed the first seven games of his senior season in 2014 with an injury. He played in six games, recording 43 receptions for 855 yards and five touchdowns. The Patriots acquired Parker and a fifth-round pick in the 2022 NFL Draft in exchange for a third-round choice in 2023. After missing out on some of the biggest free-agent names out there, New England finally made an impact addition when they traded for Parker. After being picked 14th overall in the 2015 Draft out of Louisville, Parker appeared destined for bust territory after a very poor start. When Brian Flores and former Pats assistant Chad O’Shea arrived in Miami in 2019, Parker exploded, leading the AFC in receiving yards with 1,202. Parker, who has recorded 24 touchdowns in his seven-year career, is still on track to earn roughly $5.7 million in base salary in each of the next two seasons. While he only recorded 515 yards receiving last year due to injuries, he profiles as a strong bounce-back candidate under Belichick in New England.

Who is DeVante Parker Girlfriend?

DeVante Parker is very confidential when it comes to his personal life. He has not stated anything about his love life to the media. Thus, it is unclear whether he is married or in a relationship. Only the fact is known that he is a dad to his beautiful daughter whose name goes by Nylah (born on 20th January 2015). He has not revealed any information about his girlfriend or mother of Nylah. At present, he is living a happy life with his daughter and his partner. His sexual orientation is straight and he is not gay.

What is DeVante Parker Net Worth 2022?

DeVante Parker is a talented successful NFL wide receiver whose net worth is estimated to have between the range of $5 Million - $10 Million as of 2022. His annual salary was $7,750,000, including a $1,900,000 signing bonus for playing for the team, Miami Dolphins. Recently, the New England Patriots have finally addressed their wide receiver position, adding wide receiver DeVante Parker via trade with the Miami Dolphins. New England is reportedly sending a third-round pick in next year's draft to its division rivals in exchange for Parker and a fifth-rounder in 2022. Thus, his exact contract and salary details are unavailable at a moment. His main source of wealth is from football career and he is living a cool lifestyle.

How tall DeVante Parker is?

DeVante Parker is a handsome man with an attractive personality. He stands at the perfect and tall height of 6 feet 3 inches or 1.91 m. His balanced body weight measures 99 Kg or 219 lbs. His body type is athletic. He has got a healthy body at present. His other body measurement is still to get disclosed yet. His eye color is brown and his hair color is black.

Trivias About DeVante Parker You Need To Know.