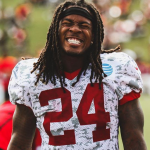 An American football running back for the Atlanta Falcons of the National Football League is named as Devonta Freeman. He was drafted by the Falcons in the fourth round of the 2014 NFL Draft. He played college football at Florida State. He is a very outstanding as well as a talented player for the Atlanta Falcons. He plays by wearing shirt number of 24.

Falcons star Devonta Freeman headed to injured reserve as injuries pile up in Atlanta. A Falcons roster that has been devastated by injuries this year has just taken another hit. The team announced on Tuesday that running back Devonta Freeman will be placed on injured reserve. The move comes as somewhat of a surprise and that's because Falcons coach Dan Quinn gave no indication that Freeman might miss an extended amount of time. Quinn met with the media on Monday and said that Freeman would "likely" miss the team's Week 7 game against the Giants. The decision to put Freeman on injured reserve will almost certainly end his season, although there's a chance that he could return to the team in late December, a move that the Falcons would likely only make if they're still in contention. Freeman has been battling injuries all year. In the Falcons' opener against the Eagles, the running back suffered a knee injury that ended up sidelining him for three weeks. The 26-year-old then returned in Week 5, only to suffer multiple injuries (groin, foot) in a 41-17 loss to the Steelers. Due to those two injuries, Freeman sat out of Atlanta's 34-29 win over the Buccaneers on Sunday. The Atlanta Falcons running back is having groin surgery and will be placed on injured reserve.

Devonta Freeman was born to Lorraine Freeman (mother) and Alfonso Nails (father) on 15th March 1992, in Baxley, Georgia, in the United States. His nationality is American. He lost his aunt when he was 14 years old. Her name is Tamekia N. Brown. She died at the age of 24. In honor of his aunt, Freeman tattooed her name on his left arm and now wears jersey number 24. His horoscope sign is Pisces.

Talking about his education, he attended Miami Central High School, located in West Little River, in Florida. During his days at Miami, he was part of the school’s football team called the Rockets. In his junior year, he helped the team to win the Class 6A state championship held in 2010 and was listed as the MVP.

Devonta has got attractive body features. He looks very handome with a charming face which attracts a lot of followers towards him. His body build is athletic. Talking about his height and weight, he stands 1.73 m tall with the balanced weight of 93 Kg. His other body measurement such as chest size, waist size, eye color will be updated soon.

Net worth of Devonta

The net worth of Devonta is surely in millions as he is a very professional player. Atlanta Falcons RB Devonta Freeman has career earnings of $20.48M over five seasons, which ranks 606th among active NFL players entering 2018. He earned $4.42M in 2017, which ranked 12th among RBs and 265th overall in the NFL. He is earning a good amount of money from his career. His major source of income is from playing football

Devonta is not married yet but he is in a relationship with Luther Campell. Luther Campell is the former leader of the music group 2 Live Crew. The lovebird is living a happy life each other. There is no any sign of separation between them. The couple has no child till now. They are living a peaceful life and spending blissful moments together. The couple is spotted time again time and they are enjoying their life fully.

Trivias About Devonta Freeman You Need To Know.