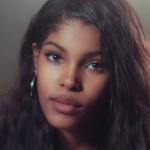 Diamond White is an American singer and actress who is well known for her appearance on the second season of the US version of the American reality television music competition show "The X Factor" where she finished in the fifth position. She also got recognition for her voice in several hit series including "Phineas and Ferb", "Transformers: Rescue Bots", "The Haunted Hathaways", and "Sofia the First". Diamond White's popularity increased in 2007 after she starred in a Chicago-based production of The Color Purple at the age of 8. She also has been portraying the role of Paris Buckingham in the American television soap opera "The Bold and the Beautiful" since 2020.

What is Diamond White Famous for?

Where was Diamond White Born?

Diamond White was born on January 1, 1999, in Detroit, Michigan, United States. Her birth name is Diamond White. Her nationality is American. Her ethnicity is mixed while Capricorn is her zodiac sign.

Diamond White was raised by her mother, Deborah after her father left the family when she was just 7 years old. For a long period, she and her mother struggled financially. She did her schooling at a local school in Los Angeles. She had an interest in singing since her childhood. Her mother always supported her and also made her join music and acting classes from a young age.

Who is Diamond White dating?

Diamond White is currently single and has not been married. Also, she has not revealed much about her personal life. The young singer and actress, White seems to be much more focused on her career than her personal life. She currently resides in Los Angeles, California.

What is the Net Worth of Diamond White?

Diamond White has quite good earnings from her professional career as a singer and actress. Having her career started in 2007 at the very young age of 8, Diamond White has come a long way up leading her successful career for over 14 years now, undoubtedly managed to earn a healthy fortune from her several albums, and appearances on series and movies. She also makes additional income from her Youtube channel "Diamond White" which has over 170k subscribers. With all of her sources of income, Diamond White has an estimated net worth of around $12 million. She is living a luxurious lifestyle with her present earnings.

Diamond White is a gorgeous lady with a well-maintained hourglass body physique in her 20s. She stands tall with a height of 5ft 2inches(1.57m) while her body weighs around 55kg(121 lbs). Her body measurement is around 34-25-34 inches with a bra size of 35B, 4(US) as her dress size, and 9(US) as her shoe size. She has a brown complexion with black hair and a pair of beautiful black eyes.  She loves to highlight her hair and often shares pictures with her new look on her social media accounts.

Trivias About Diamond White You Need To Know.