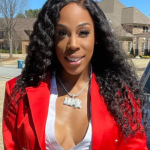 Dianna Williams is an American Entrepreneur, Television personality, and Dance Choreographer who is best known for her dance reality TV series "Bring It!". The show focused on the competition between her dancing dolls and other dance groups. The show got aired on Lifetime Channel from 2014 to 2018. She is also famous as Miss D. She founded her dance studio "Dollhouse Dance Factory" in 2010 in Jackson, Mississippi where she trains her dance team, Dancing Dolls. She also won the Best Doll Studio Award for her Dollhouse Studio.

What is Dianna Williams famous for?

Where was Dianna Williams born?

Dianna Williams was born on December 1, 1978, in Jackson, Mississippi, United States. Her birth name is Dianna Maines. She holds an American nationality. Her ethnicity is African-American while Sagittarius is her zodiac sign.

She was born as twins to Wayne Maines(father) and Kelly Maines(mother) along with her twin brother, Zurich Maines. She has three sisters; Asher, Monique Carr, and Terra Angel. She was raised in her hometown, Jackson along with her siblings. Her parents made her join a dance school, Angie Luke School of Dance at the age of 4. While in the classes, she learned different forms of dance like "Ballet", "Jazz", "Modern", "Ballet Point", and "Belly Dance". Dianna went on to participate and win different dance competitions.

She did her schooling at Raymond High School. Later, she attended Jackson State University and got graduated with a Bachelor of Science degree in Criminal Justice in May 2005. She also was a member of the "Eye of the Tiger Drill Team" and "Captain of the California State Dominguez Hills University Cheerleading Squad during 1989-1998. She also worked as a Recreation Aide and the Dance Instructor for its various programs on the north side.

Dianna Williams is a married woman. She is currently married to her only husband, Robert Williams. Robert is an American Entrepreneur who owns the AAU basketball team. The couple tied the knot in 2009. The couple is blessed with a son named, Cobe Jalen Williams, whom Dianna gave birth to, and a daughter named, Aja Williams, from the first marriage of Robert. She along with her family currently resides in Atlanta, Georgia. Besides, she is a dog lover and owns a Yorkie named "Coco".

How much is Dianna Williams worth?

Dianna Williams has earned a good amount of money from her profession as an Entrepreneur, Television personality, and Dance Choreographer. Having started her career as a dancer, Dianna has come a long way becoming one of the most famous choreographers in the United States, being the founder of "Dancing Dolls Factory". She also owns a beauty line "The Buck Box". Including all of her earnings, Dianna has an estimated net worth of $2 million as of 2022.

How tall is Dianna Williams?

Dianna Williams is a beautiful woman with a well-maintained hourglass body physique in her mid-40s. Her strong personality matches her body physique with her dark-toned skin that shines the most with her captivating smile. She has black hair and a pair of brown eyes. She stands tall with a height of 5ft 3inches(1.60m) and has a bodyweight of 75kg. Her body measurement is 36-28-35 inches. Her shoe size is 6(US).

Trivias About Dianna Williams You Need To Know.