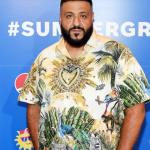 Real name Khaled Mohammed Khaled, known as DJ Khaled in the world of hip-hop music Industry. He is also a songwriter, actor, record producer, and media personality from American society. DJ Khaled rose to prominence as a radio host in the 1990s on Miami hip hop station 99 Jamz. He was then hired as a DJ for Terror Squad's live performances. He later released his debut studio album in 2006. He has already released 11 studio albums to date and won 1 Grammy Award, 1 American Music Award, and 5 ASCAP Awards among others.

What is DJ Khaled famous for? 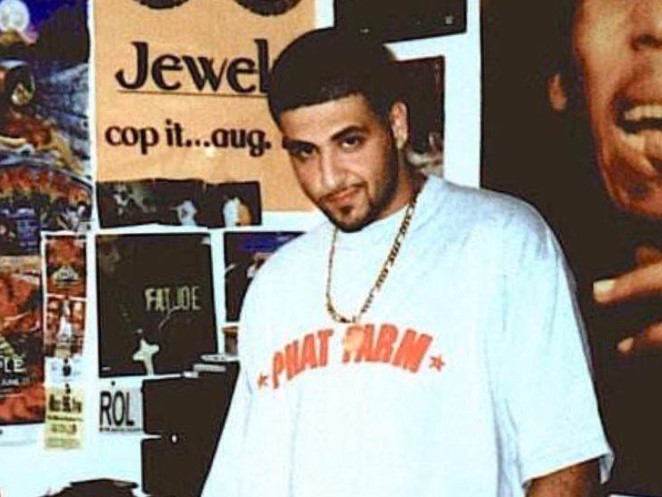 Where is DJ Khaled From?

He was born on November 26, 1975, in a small city called New Orleans, Louisiana US. Khaled Mohammed Khaled is his birth name. He is Palestinian from Muslim society and Arab Ethnicity, he migrates with his family to the US and starts to make his own carrier. He was born and raised in Miami, Florida, and start experimenting with music from an early age. It’s not disclosed about his parents but says been migrate from Palestine to the US.

He has a brother named Alla Khaled known also as Alec Ledd who is an actor. He has played some short TV Series and TV Movies. Billy DeWitt 2013-2014 Bad Weather Films 2007 and Judy’s Got a Gun are some of his played movies. He is from the Muslim religion and his Zodiac sign is Sagittarius. He went for his education at Dr. Philips HighSchool. 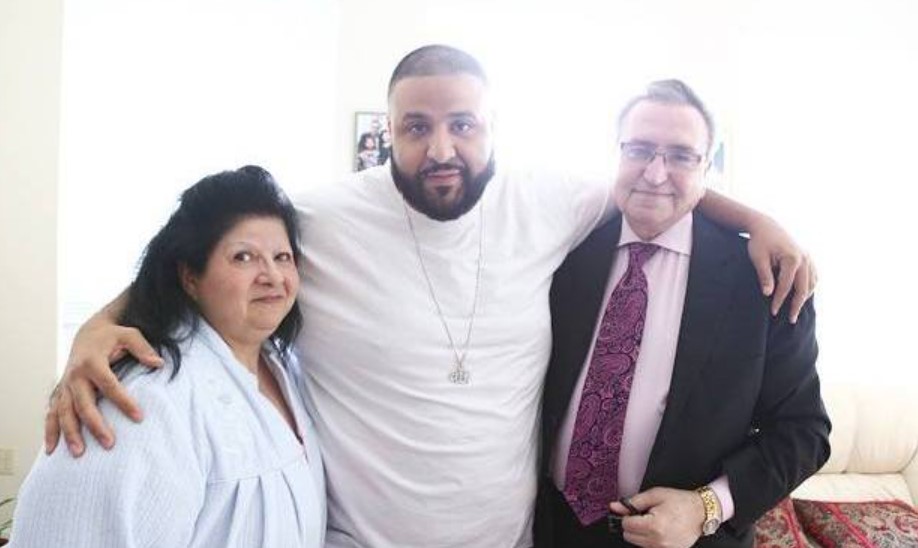 Although he is Palestinian from Muslim society, he migrates with his family to the US, starts to make his own carrier, and was fully supported by his family. He starts his carrier in 1990 with first gained prominence as a radio host on Miami Hip-hop station named 99 Jamz. Due to his popularity, Terror Squad hired him as the DJ for their live performances.

He has collaborated with so many singers like Justin Bieber, Rihana, Jay –Z, Beyonce, Nicki Minaj, Kanye, and Lil Wayne and supported with so many newcomers for the music. Throughout his career he has gone with many monikers; Terror Squadian, Beat Novacane, Arab Attack, Big Dog Pitbull and Mr. Miami and as a producer of music he has worked on rap and hip hop albums like True Story by Terror Squad, Real Talk by Fabulous and All or Nothing by Fat Joe. He has also co-founded the record label “We the Best Music Group” and became the president of Def Jam Records South in 2009 as he is a Louisiana Native.

DJ Khaled has been in the music industry for decades, working with young artists to help them become successful long before he turned his attention in building his own brand. Slowly, audiences started becoming aware of DJ Khaled and his unique personality.

In 2006, Khaled released his very first album, “Listennn…the Album.” It did quite well and eventually led to his second album in 2007, “We the Best.” The second album is when Khaled really started his series of high-powered collaborations with fellow artists like T-Pain, Rick Ross, Birdman, and Lil’ Wayne. Afterward, there is not any limit of albums he has published for audiences and viewers with collaborated with so many singers like Justin Beiber, Jay-Z, Beyonce, and more. Some of his albums We Global in 2008, Victory 2010, We the Best Forever in 2011, Kiss the Ring 2012, Suffering from success 2013, Grateful in 2017 and Father of Ashad in 2019 makes a big turnover for his life and career.

Besides recording music, he is also a book writer, and “The Keys” book by him makes him a best-selling author in 2016, recounts personal anecdotes, and shares his philosophy on how to realize one’s goals in life. He is also an actor who provided a voice in the animated movie “Spies in Disguise” released on December 25, 2019, and appears in “Bad boys for life” movie.

The interesting thing about him is, he has played few movies like “Shottas” in  2002 as Richie’s Homeboy, Pitch Perfect 3 2017 played himself, Spies in Disguise 2019 (gave his voice in this movie), and also Bad Boys for Life in 2020 as Manny the Butcher and collect Worldwide box office collection of 418.5 US Million dollars. 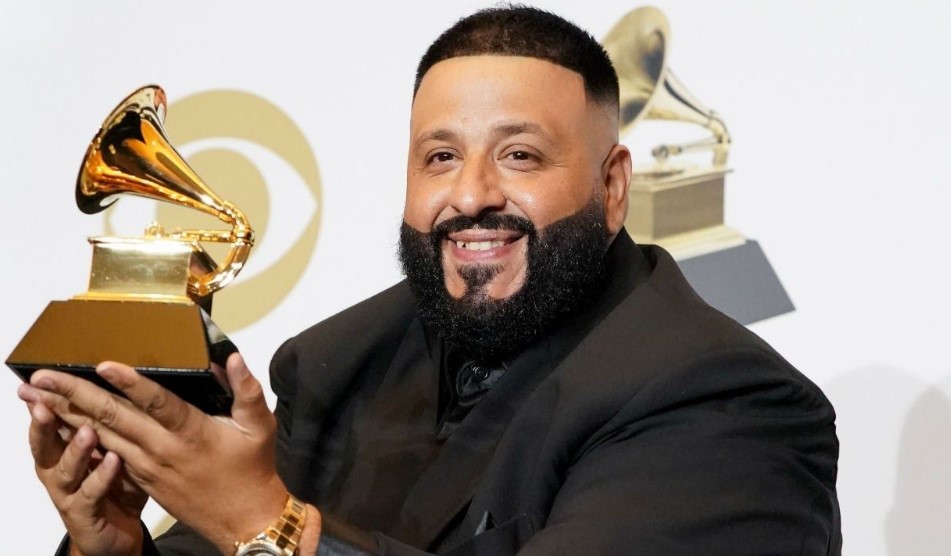 When we talk about Awards and Nominations for DJ Khaled, there are plenty of different categories in different songs. American Music Awards (won Favorite Rap/Hip-Hop Song “I am the One” (Featuring Justin Beiber, Quavo, Chance the Rapper & Lil Wayne 2017) and nominated for collaboration of the Year 2017. He has won ASCAP (American Society of Composer, Authors, and Publisher), Billboard Music Awards, BET Awards, BET Hip Hop Awards, BRIT Awards, Gaygalan Awards. He won Grammy Award for Best Rap/Song Performance “Higher” with John Lengen & Nipsey Hussle 2020 and also Nominated Grammy Awards for Best Rap/Song Collaboration “I’m the One” with Rick Ross, Drake & Lil Wayne 2012. He has also won the DJ of the Year in 2012, 2013, 2017, and 2018. He has won MVP of the Year in 2016, 2017, and nominated for the same category. He has won best Collabo, Duo or Group in 2017 for “Wild Thoughts” songs and also nominated for the same title in 2019 with Nipsey Hussle & John Legend. He has won GAFFA Awards (Denmark)  In 2018 and nominated for various titles. He has won Grammy Award for Best Rap/Song Performances for “Higher” album featuring John Legend & Nipsey Hussle in 2020. He has won Hip-Hop song of the Year “Wild Thoughts” (Featuring Rihanna & Bryson Tiller) in 2018. He has won Best Radio DJ, Best Video awards from Ozone Awards. 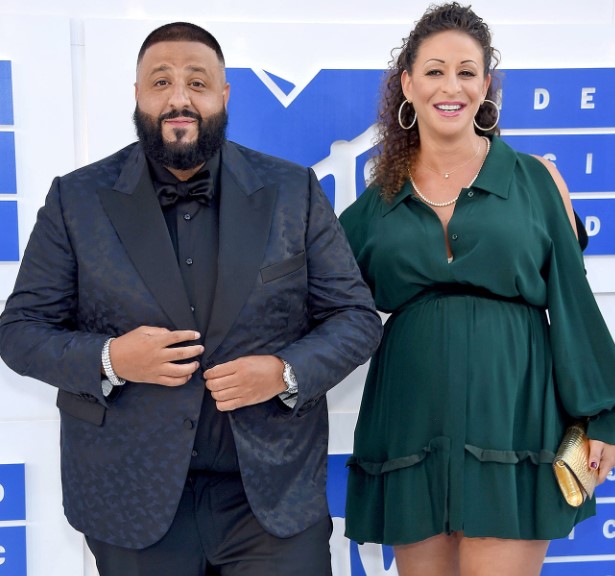 When Did DJ Khaled Get Married?

DJ Khaled is a happy family man; Khaled has been with his wife Nicole Tuck for eleven years. She has an impressive resume, which includes a master’s in education and primarily spends her time managing Khaled’s career and has two kids name Ashad Tuck Khaled and Aalam Khaled in 2016 and 2018. 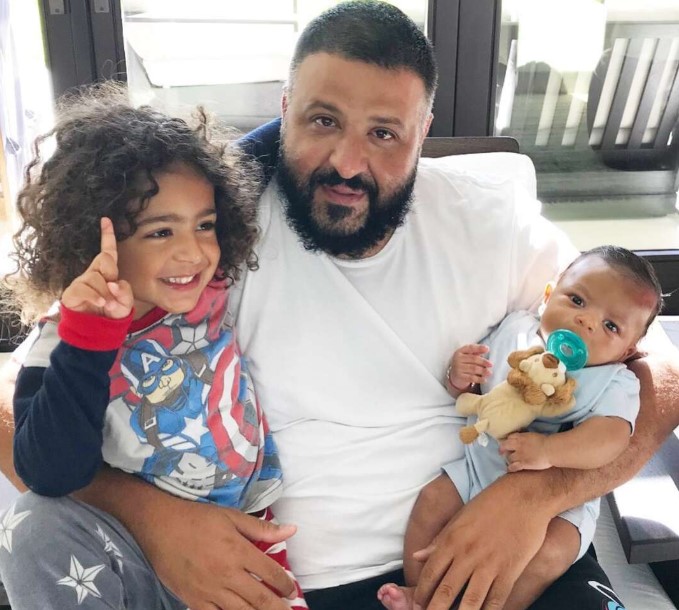 Co-founder DJ Khaled and Floyd Mayweather Jr were indicted for fraud in May 2018 for failing to disclose payments accepted from issuers of an initial coin offering, specifying a personal 50,000 US Dollars promotional payment from beleaguered cryptocurrency firm Centra Tech Inc. and together both DJ Khaled and Floyd Mayweather Jr. agreed to a total settlement of USD 750,000 with the Securities and Exchange Commission (SEC).

How tall is DJ Khaled?

He is 1.69m tall and 85kg by the weight and by sexual orientation, he is straight. He has short-cropped hairstyle with Black hair and Dark Brown Eye color. He has a tattoo of baby Ashad’s footstep on his arm and says him to god and now he has completed the set with “another one” thought slightly faded the symbolic importance remains, and it wouldn’t be surprising to see him fill it out in the coming days.

What is DJ Khaled’s Net Worth?

DJ Khaled is an American/Palestinian record producer, radio personality, DJ, record label executive, and author. Khaled is also president of the record label 'Def Jam South' and CEO and founder of 'We the Best Music Group'. In 2020. He does some commercial shows, tours and also collects a big amount from the endorsement. DJ Khaled's net worth is estimated to be over $65 million.