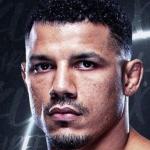 Drakkar Klose is an American mixed martial artist. He is currently signed to the UFC where he competes in the Lightweight division. He previously competed in promotions Ressurection Fighting Alliance and World Fighting Federation and is a one-time RITC Lightweight Champion. As of July 2022, he has compiled a record of 7-2 in the UFC.

What is Drakkar Klose Famous For?

Where is Drakkar Klose From?

Drakkar Klose was born on 9 March 1988. His full name is Drakkar Don Klose. He was born in South Haven, Michigan in the United States and holds American nationality. He has six siblings. He belongs to a mixed ethnicity and his religion is Christianity. Information about his parents is not known.

Regarding his educational background, he attended South Haven High School. He competed in wrestling and represented South Haven in the state-level tournaments. He won the state championship in 2005. After high school, he attended North Idaho College where he continued wrestling. He then transferred to Lindenwood University for his junior year. However, he was kicked out of college.

Who is Drakkar Klose Wife?

Drakkar Klose is a married man. He is married to Cortney Casey. His wife Casey is also an MMA fighter who competes in the UFC in the Strawweight division. They share a son named Kingston, born in 2018.

What is Drakkar Klose Height?

What is Drakkar Klose Net Worth?

Drakkar Klose earns from his professional career as an MMA fighter. Currently signed to the UFC, he competes in the lightweight division. His income comes from contracts, fight purses, and sponsorships. At present, his net worth is estimated below $1 million.

Trivias About Drakkar Klose You Need To Know.