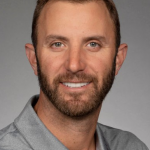 Dustin Hunter Johnson famously known as Dustin Johnson is a professional golfer. At present, he is playing on the PGA Tour. He is nicknamed as "DJ". He has proven himself as one of the grandmasters in the act of swinging. He won the Monroe Invitational and the Northeast Amateur after playing collegiate golf at Coastal Carolina University. He is one of the longest drivers on the PGA Tour, having been ranked in the top five annually from 2008 and leading in 2015. He won the 2016 U.S. Open at Oakmont Country Club with a 4-under-par score of 276 for his first major championship and became the world number 1-ranked golfer in February 2017 and remained there for 64 consecutive weeks, the 5th longest run as number 1. He also won the Genesis Open in February by five strokes over Scott Brown and Thomas Pieters as of 2017. He has also launched his foundation in 2010 that is focused mainly on help youngsters with youth and college golf programs. Winning the 2020 Travelers Championship, he became only the third player in Tour history to win a Tour title in each of his first 13 seasons, joining Jack Nicklaus (17) and Tiger Woods (14). He is a very talented golfer in the history of golf.

Dustin entered the final round of the PGA Championship atop the leaderboard and shot 68 on Sunday (7th August 2020). Sunday marked the fourth time that the 36-year-old led going into the final round of a major championship, and it was the fourth time that he failed to close the deal. For Johnson, who shot a two-under 68 on a Sunday primed for red numbers to finish three strokes back of winner Collin Morikawa, it was his third runner-up in his last eight major starts, along with a T-3. But they don't hand out trophies for almost winning. Johnson is now 0 for 4 after taking at least a share of the lead into the final round of a major. Johnson finished Saturday with a one-shot lead at 9 under and made the turn at minus-10. But he failed to birdie the par-5 10th-three-putting from 17 feet-after most of the competition had done just that. By the time he reached No. 14, he had fallen behind by a stroke, thanks to Morikawa's chip-in on that very hole moments earlier. Whereas Morikawa drove the green on the par-4 16th and made his eagle putt, and from there, it was a race for second. His lone major victory had two-time defending champion Brooks Koepka dissing him on Saturday, saying he felt good going into the final round because "DJ's only won one." Rory McIlroy came to Johnson's defense, noting Johnson has 21 career wins to Koepka's seven.

Everything To Know About Collin Morikawa 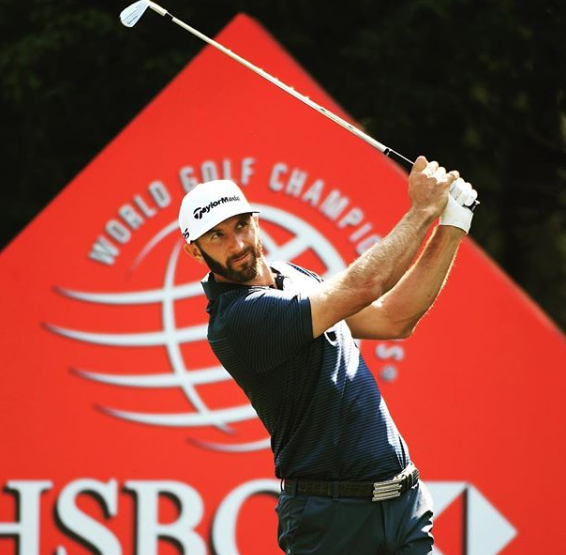 What is the Birthplace of Dustin Johnson?

On 22nd June 1984, Dustin Johnson took birth in Columbia, South Carolina, the USA. His birth name/real name is Dustin Hunter Johnson. As of 2020, he celebrated his 36th birthday. He holds an American nationality and his ethnicity is American-White. He is currently residing in Palm Beach Gardens, Florida, the USA. He was born to his parents; Scott Johnson (father) and Kandee Johnson (mother). He also has two siblings; brother named Austin Johnson, and sister, Laurie Johnson. His brother is his caddie since late 2013. For his education, he attended Coastal Carolina University where he played golf and majored in Sports Management. He won the Monroe Invitational and the Northeast Amateur in 2007 as an amateur. Also, he played on the winning 2007 Walker Cup and Palmer Cup teams. Additionally, he is the first player since Tiger Woods to win at least once in each of his first seven seasons coming out of college. His Zodiac sign is Cancer and his religion is Christian.

How was the Career of Dustin Johnson? 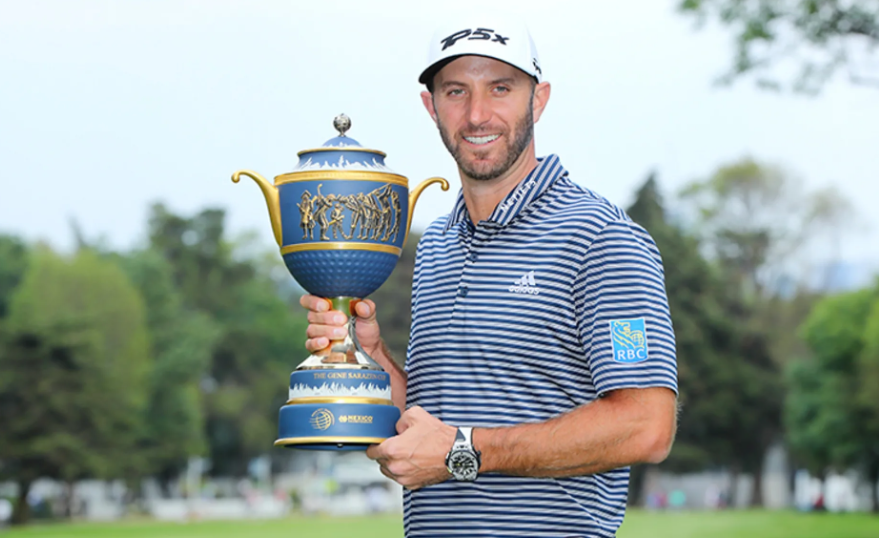 Everything To Know About Tiger Woods Biography

Awards and Achievements of Dustin Johnson

Who is Dustin Johnson's Dating?

Dustin Johnson is not married yet and he is still to get married. In August 2013, he engaged his beautiful girlfriend, Paulina Gretzky. Paulina Gretzky is a famous model, singer, and celebutante who is the daughter of Wayne Gretzky. The duo engaged after seven months of dating. The duo is also blessed with two sons named Tatum Gretzky Johnson (born January 19, 2015), and River Jones Johnson (born June 12, 2017). At present, the couple is living a happy life without any disturbances and they are planning to get married soon.

Everything To Know About Paulina Gretzky 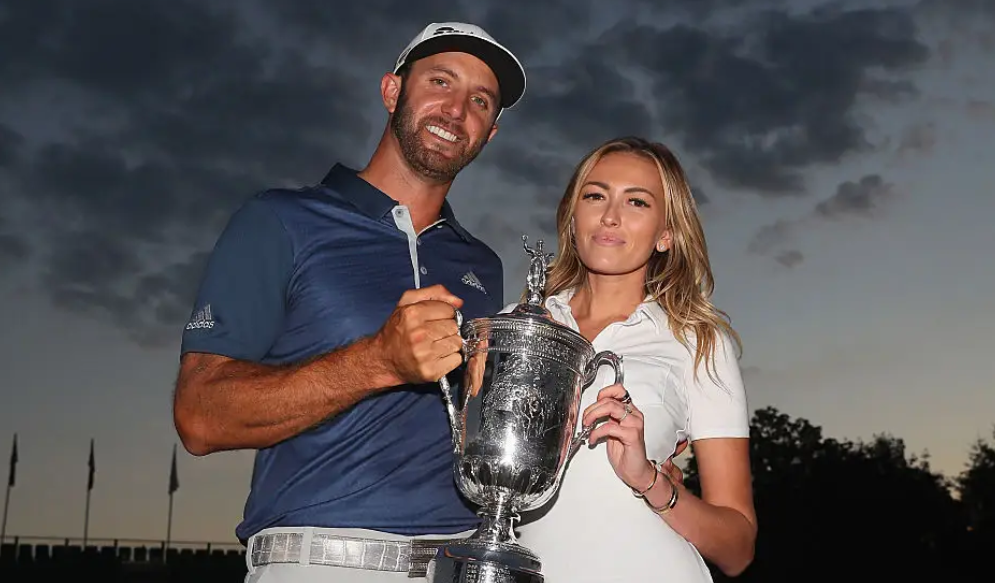 Previously, he was in a relationship with Amanda Caulder.

What is the Net Worth, Prize Money, and Salary of Dustin Johnson as of 2020?

Dustin Johnson is a professional golfer who plays on the PGA Tour becoming the world number 1-ranked golfer in February 2017 and remained there for 64 consecutive weeks, the 5th longest run as number 1. As of 2020, the net worth this golfer is estimated to have $20 Million. He won the WGC-Cadillac Championship at Trump National Doral in Miami which earned him $1,570,000 moving him to 7th in the world rankings as of 2015. He also won the first FedEx Cup playoff event which helped him to move up three spots to No. 1 on the official money list with $8,392,068 and also moved up to No. 6 on the career money list as of 2017. As of 17th May 2020, he along with Rory McIlroy got $1,850,000 in TaylorMade Driving Relief Tournament. Till 2020, he has earned $61,755,908 from the season 2007. At present, he is earning a considerable amount of salary from his golf career. Additionally, he has also endorsed Adidas, TaylorMade, NetJets, BodyArmor, New Era, Hublot, and more which also boost up his income. Regarding his house details, he purchased $4.95 million home in Palm Beach Gardens, Florida in 2015 which is luxury with five bedrooms and 6.5 bathrooms. He is living a luxurious lifestyle from his earnings and he is satisfied with his earnings. His major source of earning is from a golf career.

How tall is Dustin Johnson?

In 2019, Dustin Johnson underwent arthroscopic surgery Thursday to repair cartilage damage in his left knee. He stumbled badly towards the end of the season and cited "fatigue" as the main reason for his struggles, highlighted none better than finishing tied last at the 30-man Tour Championship at East Lake last month. Johnson's management team issued a statement claiming the former World No.1 is expected to make a full recovery after his "routine" surgery and that he is expected to return to competitive golf on the PGA Tour later this year. He previously had a similar procedure on his right knee in 2011.

Trivias About Dustin Johnson You Need To Know.