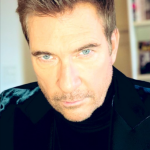 Dylan McDermott is an American actor who is best known for his lead role as lawyer and law firm head, Bobby Donnell on the American legal drama television series "The Practice". His role in the series garnered critical acclaim and also earned him a Golden Globe Award for Best Performance by an Actor in a Television Series – Drama.

What is Dylan McDermott famous for?

What nationality is Dylan McDermott?

Dylan McDermott was born on October 26, 1961, in Waterbury, Connecticut, United States. His birth name is  Mark Anthony McDermott. He holds an American nationality. His ethnicity is White while Scorpio is his zodiac sign.

He was born to Richard McDermott(father) and Diane McDermott(mother). When he was born, Diane was fifteen and Richard was seventeen; the couple had split by 1967, and Diane and her two children were living with her mother, Avis Marino. Diana was later murdered on February 9, 1967.

McDermott was raised by his maternal grandmother, Avis in Waterbury, and his younger sister, Robin. He frequently visited his father, who ran the West Fourth Street Saloon in Greenwich Village, New York, as a teenager. He also worked in his father's bar, serving drinks and breaking up fights.

He also got into the Mudd Club and Studio 54 by fast-talking his way in. He had an interest in performing since he was a boy, and he frequently copied his acting heroes, such as Marlon Brando and Humphrey Bogart.

He joined Holy Cross High School in Waterbury and later got graduated in 1979. Eve Ensler, his father's third wife, adopted him when he was 15 years old. She was 23 years old at the time. Eve is an American playwright and performer who is mostly known for her play "The Vagina Monologues".

She always supported McDermott to pursue his career as an actor. She also wrote roles for him in her plays. After Ensler's miscarriage, he adopted the name Dylan, which was initially intended for her newborn child. Later, he attended the Jesuit-run Fordham University and got graduated with a BA in 1983. He also studied under Sanford Meisner at the Neighborhood Playhouse School of the Theatre in New York City

Who is Dylan McDermott married to?

Dylan McDermott is currently single. Previously, he was married to Shiva Rose. Rose is an American actress, activist, blogger, and owner of a natural beauty line. The pair tied the knot on November 19, 1995. The couple has two daughters, Colette and Charlotte. The birth of Colette is a central theme in Ensler's novel The Vagina Monologues. Colette attended Barnard College, where McDermott served as a trustee.

The couple split up on September 27, 2007, according to People's magazine. Later, they got divorced on January 2, 2009. He then got engaged to his Stalker co-star Maggie Q on January 14, 2015. However, the couple split after a four-year engagement in February 2019.

Also, he has been featured in Men's Health and other publications. He also reached the final in the GQ "Man of the Year" issue in 1999. He is an alcoholic in remission. Since 1984, he has been sober.

How much is Dylan McDermott's net worth?

Dylan McDermott has earned a good amount of money from his profession as an actor. McDermott began his career as a theatrical actor and has progressed to become a well-known American actor throughout his 35-year career. He has performed in several films and television programs, earning a sizable quantity of money in the process. He also earns additional income from his endorsement deals with renowned brands. Including all of his earnings, McDermott has an estimated net worth of $25 million as 2022.

How tall is Dylan McDermott?

Dylan McDermott is a handsome man with a well-maintained athletic body physique in his early 60s. He has a fair complexion brown hair and a pair of sparkling blue eyes. He stands tall with a height of 6ft(1.83m) and has a body weight of 87kg(192 lbs).

Trivias About Dylan McDermott You Need To Know.