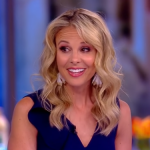 Elisabeth Hasselbeck is a retired American television personality as well as a television presenter. She came to fame as a contestant on the second season of the American version of Survivor in January 2001. Today, we will try to disclose her facts including her career, earnings, affairs and many more.

What Is Elisabeth Hasselbeck Known For?

What Is The Birthdate Of Elisabeth Hasselbeck?

Elisabeth Hasselbeck was born in and spent her childhood in Cranston, Rhode Island. She is a famous American talk show host and also a well-known television personality. Her birth name is Elisabeth DelPadre Hasselbeck.

Hasselbeck is the daughter of Elizabeth DelPadre and Kenneth Filarski. Her mother teaches at Catholic-school and also layer while her father is an architect. Her brother Kenneth Jr. works as a musician and as a profession is a lawyer.

Elisabeth belongs to the mixed ethnic background as her father is of Polish descent and her mother is of Italian ancestry. Elisabeth studied at St. Mary Academy- Bay View during her teenage days.

In 1999 she attended Boston College and was graduated from there. While studying at Boston she was the captain of women’s softball team winning Big East championship. She came to highlight as a contestant of Survivor second season. She is the American version program came in fourth place.

In 2009, Elisabeth Hasselbeck won the award for Outstanding Talk Show Host along with the three other hosts of ‘The View’ at the 36th Annual Daytime Emmy Awards.

When Did Elisabeth Hasselbeck Marry Her Husband?

Elisabeth Hasselbeck is a married woman. She is married to her long-term boyfriend Tim Hasselbeck who is a professional football quarterback. The pair were the college sweethearts.

The lovebirds exchanged their wedding vows on 6th July 2002. From their marital relationship, the husband and wife are blessed with three children. They have a daughter Grace Elisabeth born in 2005 and two sons Taylor Thomas born in 2007, and Isaiah Timothy born in 2009.

Hasselbeck and her spouse Tim are maintaining a good bond since their wedlock. Along with their professions, the duo is successfully maintaining their family too. So far, there are no rumors or signs of their divorce and extramarital affairs.

In addition, She suffers from celiac disease and has even written a book to create awareness regarding the disease. The book is titled ‘The G-Free Diet: A Gluten-Free Survival Guide’.

How Much Does Elisabeth Hasselbeck Earn From Her Career?

Elisabeth Hasselbeck earns an astonishing sum of money from her multiple careers. She hosted several shows during her career as a television personality through which she definitely amassed a decent fortune.

Hasselbeck was also a judge at Miss Teen USA 2001 pageant. As of now, she earns an average annual salary of around $3 million. Furthermore, her net worth is reportedly around $16 million as of 2019.

Elisabeth further served for the Fox News as the co-host of the morning show, Fox & Friends replacing Gretchen Carlson. An employee of Fox News earns an annual wage of around $45,923-$86,886 thus, Hasselbeck also definitely got paid the salary in the similar pay scale.

Hasselbeck and her spouse own a house in Nashville. The couple bought the house for $2 million. The 7,115-square-foot home features six-bedroom and two half baths.

Observing her body measurements, Hasselbeck has a slim body figure with the measurement of 34-24-34 inches. She possesses a height of 5 feet 4 inches tall and weighs 50 Kg. She has brown eyes and blonde hair colors.

Trivias About Elisabeth Hasselbeck You Need To Know.