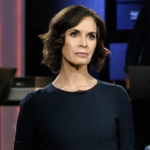 The Emmy Award winner, Elizabeth Vargas is an American TV journalist and anchor who develop a passion for journalism while she was in school. Due to her deep passion, she got a degree in journalism and entered the fourth parliament of the country that is media in 1984. During her career, she engaged different TV channels like ABC, NBC, KTVN, WBBM-TV, KTVK-TV and won a Peabody Award for her contributions in ABC News' coverage of Hurricane Sandy on 20/20. Do you know? She was the first national evening news anchor of Puerto Rican and Irish-American heritage and also the third female anchor of a network evening newscast in the U.S.

She also wrote a memoir, Between Breaths: A Memoir of Panic and Addiction which was published on 13th September 2016. The book became the best seller at that time. To know more about her, you should scroll the page below.

What is Elizabeth Vargas famous for?

What nationality is Elizabeth Vargas?

Elizabeth Vargas was born in 1962 to her parents. Currently, she is aged 59 years old. She experienced her childhood in Paterson, New Jersey, U.S. along with her two siblings. They are Amy and Christopher Vargas. She is the daughter of Rafael Vargas and Anne Vargas. Her father was a colonel in the U.S. Army while her mother was a part-time English teacher.

Similarly, she holds American nationality and belongs to the Hispanic ethnicity as his father belongs Italian-Spanish and his mother belongs to Irish-American. Her zodiac sign is Virgo.

For education, She went to study at an American high school in Heidelberg where she develop a passion for journalism. She then joined the University of Missouri in Columbia. Later, she graduated from there with a bachelor's degree in journalism in 1984.

Where is Elizabeth Vargas working now?

Who is Elizabeth Vargas married to?

Elizabeth Vargas is a married man. She is married to her long-term boyfriend named Marc Cohn who is a singer and writer. After dating almost three years, they exchanged their wedding vows on July 20, 2002. Later, The couple shares two children. They are Zachary Raphael Cohn and Samuel Wyatt Cohn. Unfortunately, the couple ended the relationship after twelve years of their marriage. However, the reason behind their separation is yet to be revealed. But some online sites were speculated that they were separated due to her alcohol addiction of her. What is truth, she only knows?

How much is Elizabeth Vargas worth?

Elizabeth Vargas had been engaged as a TV journalist since 1993. During her career, she has been involved in different TV channels. Thus, she should have a good income throughout her career. Based on some online sites, her current estimated net worth is said to be $8 million and her salary is somewhere around $750 Thousand annually. Further, her other financial details are yet to be disclosed.

Currently, she lives a rich and lavish lifestyle throughout her earnings. She is one of the well-paid journalists. Thus, she lives in a million dollars mansion with her family.

How tall is Elizabeth Vargas?

Elizabeth Vargas has an average body with a body measurement of 32-36-38 inches. She used 38B (US) bra cup size and 5(US) shoe sizes. Similarly, she has beautiful hazel eyes and she dyed her hair color brunette. Further, he has a height of 5 feet 9 inches and she weighs around 58 Kg. Overall, she has a fit and healthy body.

Trivias About Elizabeth Vargas You Need To Know.