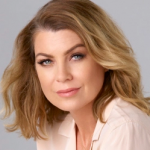 Ellen Pompeo is an actress and producer most notable to the audiences for her portrayal of Dr. Meredith Grey in the hit medical drama Grey’s Anatomy. She signed a $20 million annual contract with the American Broadcasting Company in late 2017 becoming one of the highest-paid television actors of the year. Similarly, Ellen Pompeo has been actively involved in the acting fraternity ever since 1995. She appears on screen with the same effortless beauty and cool endeavor that she is so well known for. She has also been known for her endeavors in Coming Soon, Law and Order, and Moonlight Mile.

What is Ellen Pompeo known for?

Where is the birthplace of Ellen Pompeo?

Back in her early life, Ellen Pompeo was born in Everett, Massachusetts, USA. Her nationality is American and her ethnicity is Italian, Irish, and English.

She is the daughter of Kathleen B. (nee O’Keefe) and Joseph E. Pompeo. Her father was of Italian, English, and Irish descent, while her mother was of Irish ancestry. Ellen was raised Roman Catholic. When Ellen was five her mother died of a painkiller overdose. Her father remarried soon after.  He died on 1 September 2012, in 2006.

In 2006, Ellen Pompeo told Allure “I think having my mother die at such a very young age - when she was 33 - I appreciated life so much. She has five siblings: three sisters and two brothers. She was nicknamed “the pencil”, and “stracciatella” (an ice-cream flavor).

When did Ellen Pompeo pursue her acting career?

Does Ellen Pompeo win the awards?

Ellen Pompeo has been nominated for several awards and has won many awards in her career. Some of her notable honors are listed below:

Who is the husband of Ellen Pompeo?

Ellen Pompeo's personal life details are well-known factors in her life. She is a married person and has been married to her husband Chris Ivery. They met at a grocery store in Los Angeles in 2003. They began dating and got married in the year 2007 and the relationship of the couple has been getting along pretty well ever since.

The wedding took place among friends and family. She has two children with him. Their first child is Stell and she was born in 2009. Their second daughter is named Sienna and she was born in the year 2014 with help from a surrogate mother.  On the 29th of December 2016, it was made known that they had welcomed their third child, a child christened Eli Christopher. The entire family is doing pretty well as of now.

Further, Ellen suffers from several allergies and asthma. So, She follows a healthy lifestyle, meditates twice a day for 20 minutes each, and does so inside her trailer in between takes as well.

How much is Ellen Pompeo's net worth?

Ellen Pompeo's net worth is $80 million at present. She has earned a huge amount of salary from her career. Her salary in 2019 was $20 million as per the online sources.

Her endeavors in Grey’s Anatomy have basically led her to attain such a huge amount of money. She has a yearly salary that ranges from a million dollars and has been hugely appreciated for the acting skills she has portrayed and the changes she has brought to the people of the industry.

Ellen Pompeo can be followed on social networking sites and is hugely liked and respected by her fans around the world.

How tall is Ellen Pompeo?

Trivias About Ellen Pompeo You Need To Know.