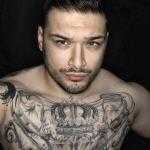 Elman España is most notable for his unique style of tattoos, Being a cover model for multiple romance novels, Being published on International & National tattoo magazines as well as his street-tough attitude, genius-level IQ & his successful self-made, self-branded merchandising.

Elman España is an American Model was born in San Juan, Texas but was raised in Mcallen, Texas. Elman attended school in the Rio Grande Valley and was most notable for his gang affiliations in his early life throughout his school years he attended high school at James "Nikki" Rowe High School for two years before getting expelled for his behavior and gang affiliations. He obtained his GED a few weeks after leaving high school.

Elman España first grabbed social media’s attention in early 2015 when a photo of the social media platform Facebook went viral, The tattoo community took notice and shared his photos over multiple social media platforms reaching millions of people and in turn exposed him to a wider audience. In 2016, Elman booked his first runway show in the city of McAllen, Texas for Model Citizen Promotions being highlighted as a special guest/model. In addition to the runway, Elman has been featured in a number of magazines both local and international. His photos have published throughout the United States, Canada, and the United Kingdom. Elman has graced the covers of multiple romance novels including the “Disarmed” series by author Stefany Rattles, as well as many tattoo magazines like Azaria magazine, Twisted Edge magazine, Surreal beauty magazine & Gorgeous freak's magazine.

Elman took this wave of opportunity to grow his social media platforms to 54K+ followers on Facebook and 26K+ on Instagram as of June 26, 2019. He has sold Elman merchandise ranging from designer figures, coffee mugs, comic books & fan shirts. He also has two mobile apps in the App Store and on Google Play Elman España: Anarchy & Elman España sticker pack which have charted on all the top charts all his merchandise revolves exclusively around his image and his brand.