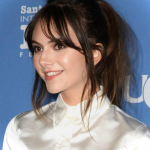 Emilia Jones is an English actress, singer, and songwriter who is best known for her lead role as Ruby Rossi in the Academy Award-winning film "CODA". The film is the English remake of the 2014 French-Belgian film "La Famille Bélier" and was premiered on January 28, 2021, at the Sundance Film Festival. Her role in the film garnered critical acclaim and earned her numerous nominations and awards. She also has been playing the main role of Kinsey Locke in the American fantasy horror drama television series "Locke & Key" since 2020. Emilia is also known for being the daughter of Welsh singer and TV presenter, Aled Jones.

What is Emilia Jones famous for?

Who are Emilia Jones' parents?

Emilia Jones was born on February 23, 2002, in Westminster, London, England. Her birth name is Emilia Annis I. Jones. She holds an English nationality. Her ethnicity is White while Pisces is her zodiac sign.

She was born as the daughter of Aled Jones(father) and Claire Fossett(mother). Her father is a Welsh singer and TV presenter while her mother is a circus performer. Her parents also performed in Joseph And The Amazing Technicolour Dreamcoat in Blackpool, Lancashire.  She has a younger brother, Lucas Jones. Born in a family with an acting background, Emilia was interested in acting since her childhood. So, she began her acting career at the age of 8.

Who is Emilia Jones's boyfriend?

What is Emilia Jones' net worth?

Emilia Jones has earned a good amount of money from her profession as an actress, singer, and songwriter. Having started her acting career at the age of 8, Emilia has come a long way to work in the academy award-winning film, CODA at just the age of 20. Following the great success of "CODA", she is sure to be getting many more offers for the films and series along with a handsome sum of money. Including all of her earnings, Emilia has an estimated net worth of $1.5 million as of 2022.

How tall is Emilia Jones?

Emilia Jones is a beautiful lady with a well-maintained hourglass body physique in her early 20s. She has a fair complexion with blonde hair and a pair of brown eyes. She stands tall with a height of 5ft 6inches(1.7m) and has a bodyweight of 50kg(110 lbs). Her body measurement is 33-24-33 inches. Her bra cup size is 33B.

Trivias About Emilia Jones You Need To Know.