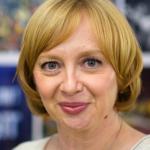 Emilia Șercan is a Romanian investigative journalist who is well known for her strong presence in revealing the plagiarism of doctoral theses of several high-ranking Romanian politicians including Deputy Prime Minister Gabriel Oprea and Prime Minister Nicolae Ciuca . She has also coordinated hundreds of other journalistic investigations, including the case of "Aunt Tamara".

Sercan also has written books including the two volumes of Romania after 1989: The Doctoral Factory or How the Foundations of a Nation Collapse(2017) and The Ponta Case. Reconstruction of the most infamous plagiarism in the history of Romania was published in 2022.

In April 2022, she became the target of the harassment and smears campaign after publishing an article on January 18, 2022, alleging that Romanian Prime Minister Nicolae Ciucă plagiarized his doctoral dissertation.

What is Emilia Șercan Famous for?

Where is Emilia Șercan From?

Emilia Șercan was born on August 2, 1977, in Vatra Dornei, Suceava, Romania. Her birth name is Emilia Șercan. Her nationality is Romanian. Sercan belongs to the White ethnicity while Leo is her zodiac sign.

Born and raised in the city of Vatra Dornei, Suceava, Emilia had an interest in journalism since her childhood as she was good at academics. She was aware of the prevailing society's situation about how the politics of the country was.

After high school, she went on to join the Lucian Blaga University of Sibiu where she got graduated from the Faculty of Communication Sciences and Journalism in 2003.

She soon received a Freedom House scholarship to the United States in 2004. She then went on to join the Faculty of Sociology and Social Work department of the University of Bucharest earning a Master's degree in 2010.

For the next 3 years, she studied for a doctorate in Communication Sciences at the University of Bucharest.

Emilia Șercan's personal life hasn't been public yet. There's been no information about if she is married or not and if then with whom. She is a strong woman in her 40s who has undoubtedly stood in front of thousands of powerful politicians in Romania.

Emilia Șercan must have quite good earnings from her career as a journalist. Having worked in the field of journalism for over 26 years, Sercan has worked on several powerful cases which surely have increased her income and salary.

Also through the books that she has written and published, she surely has managed to earn a healthy fortune estimated to be around $800k.

Emilia Șercan is a beautiful blonde lady with an average body physique in her 40s. She stands tall with a height of 5ft. 5inch. while her body weighs around 65kg.

She has a fair face complexion with blue beautiful eyes and blonde hair.

Trivias About Emilia Șercan You Need To Know.