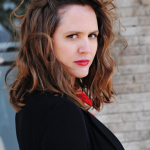 Emily Cox is an Austrian actress who is best known for her lead role of Brida in the British historical fiction television series "The Last Kingdom". She has been portraying the role in the series since 2015. Emily made her film debut in 2009 by playing the role of Gretchen Dutschke in "Dutschke". She has also made her appearances in a few big-screen movies including "The Featherless", "The Silent Mountain", and "Head Full of Money".

What is Emily Cox famous for?

Where is Emily Cox from?

Emily Cox was born on February 23, 1985, in  Vienna, Austria. Her birth name is Emily Cox. He holds an Austrian nationality. Her ethnicity is White while Pisces is her zodiac sign.

She was born as the daughter of a British father and an Irish mother. Her parents are pianists. Her parents later got divorced and she was raised in her hometown, Vienna where she completed her high school education. During high school, she became interested to become an actress after she performed in a play as part of her English classes. Her parents supported her to pursue her career in acting. So, she joined Max Reinhardt Seminar to study acting.

Who is Emily Cox dating?

Emily Cox is not married yet. She seems to be much more focused on her career than her personal life. She has not disclosed her personal life. However, in past, she was rumored to be dating her The Last Kingdom co-star, Alexander Dreymon. But, none of the stars confirmed their relationship. Emily is a dog lover and often posts videos of her dogs on her social media accounts.

How much is Emily Cox's net worth?

Emily Cox has earned a good amount of money from her profession as an actress. Having started her career in 2008 as a stage actor, she has come a long way in becoming a lead actress in "The Last Kingdom" in her 14 years-long acting career. Including all of her earnings, Emily has an estimated net worth of $3 million as of 2022.

How tall is Emily Cox?

Emily Cox is a beautiful lady with a well-maintained hourglass body physique in her late 30s. She has a fair complexion with brown hair and a pair of black eyes. She stands tall with a height of 5ft 7inhces( 1.7m) and has a bodyweight of 60kg. Her body measurement is 34-23-33 inches.