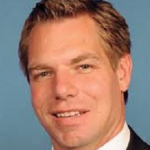 Eric Michael Swalwell Jr. famed as Eric Swalwell is an American politician who serves as the U.S. Representative from California's 15 congressional districts since 2013. His district covers most of eastern Alameda County and part of central Contra Costa County. He was elected in November of the year 2012, by winning against incumbent Pete Stark, who had held the office since 1973. He took office on 3rd January 2013. He is also the member of the Democratic Party. For more information, read the biography below.

Eric Swalwell becomes the first candidate to drop out of the 2020 presidential primary race after failing to gain traction in the crowded Democratic primary. He canceled a 4th of July event last week, prompting questions over his candidacy. He is the second Democrat to drop out of the race, following former West Virginia State Sen. Richard Ojeda's brief entry into the presidential contest earlier this year, leaving the field at 23 candidates. During the first Democratic primary debate last week, the California Democrat took aim at former Vice President Joe Biden and other older Democratic candidates, as he said they need to "pass the torch" to a new generation of leadership. "We have to be honest about our own candidacy's viability," Swalwell told reporters at a press conference Monday. "Today ends our presidential campaign, but it is the beginning of an opportunity in Congress with a new perspective shaped by the lives that have touched me and my campaign over the past few months."

Eric Swalwell was born on 16th November 1980, in Sac City, Iowa. As of 2018, his age is 38. He was born to a father named Eric Nelson Swalwell and a mother named Vicky Joe Swalwell. His father was serving as police chief in Algona, Iowa. He holds American nationality and belongs to Caucasian ethnicity. His birth sign is Sagittarius. He was graduated from Wells Middle School, and then from Dublin High School in 1999. He attended Campbell University in North Carolina on a soccer scholarship from 1999 to 2001. He transferred to the University of Maryland, College Park, as a junior. He completed his bachelor's degree in government and politics at Maryland in 2003. He enrolled at the University of Maryland School of Law and earned his Juris Doctor in 2006.

Being at the age of 28, Eric Swalwell still looks very young with a charming smile on his lips attracting a lot of people towards him. Talking about his height and weight, he is 6 feet tall with a balanced body weight of 88 kg. His hair color is Light Brown and his eyes are Hazel color. Unfortunately, his other body measurements such as shoe size, bicep size and more have not been disclosed yet but it will be added soon.

Eric Swalwell is a married person and he has married twice till now. He and his first wife are divorced. He married his second wife named Brittany Ann Watts. His wife Brittany is a sales director at the Ritz-Carlton in Half Moon Bay in October 2016. The couple has a son named Eric Nelson Swalwell and a daughter named Kathryn Watts Swalwell. As of today, the couple is living a happy life without any sign of divorce and disturbances. The couple seems to be very romantic to each other and supports well for each other. The couple is often spotted in the public places holding hands. They are enjoying their life a lot.

Net Worth of Eric Swalwell