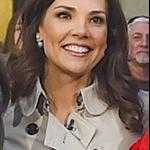 One of the prolific American Journalist Erica Hill has returned to CNN working as a lead fill-in anchor and national correspondent. She has worked as co-anchor, anchor, reporter and also worked as a national and special correspondents as well.  Born to Steve Hill and Cheryl Hill on July 20, 1976, in Clinton,  connecticut, named Erica Ruth Hill completed her graduation from Boston University in 1998 majoring in Journalism(BA).

Hill started her professional career in journalism following year of her graduation. she worked as a production assistant for an online news program "PC Week Radio". Working at PC Week Radio for a year or two, Hill joined TechTV in 2000 as a reporter and as a co-anchor and correspondent for the program later. TechTV was named TechLive later. She was admired for her reporting of September 11, 2001 terrorists attacks in States.

After TechLive, Hill made a shift to CNN Headline News in 2003. She was hired as a general news anchor and received numerous opportunities to cover several breaking news stories and reported major events for the network. Presidential campaigns of 2004 and 2008, new reporting about the war in Iraq, Mumbai terror attacks and Hurricane Katrina were some of Hill's major national and international breaking news coverages. She succeddend in demonstrating her wide range of work ability while working at CNN. Hill worked as national correspondent for CNN Newsource, co-anchored Prime News Tonight and CNN Tonight and anchored Prime News with Erica Hill during her tenure at CNN.

In 2008, alonglside CNN, Hill accepted to work as a permanent anchor at CBS news  as well. two years later, in 2010, Hill announced leaving CNN join CBS News. She joined the channel on January 13, 2010. She was appointed as their news anchor. She hosted programs like “The Early Show”, “CBS Evening News”, “CBS This Morning” and other notable shows for the channel. She stayed at CBS for two years. And, NBC News announced her recruitment as their co-anchor and national correspondent in 2012. She hosts Weekend Today for the channel.

Hill's got a long experience, attractive looks and better screen appearance. She stands tall at five feet and six inches. Her dedication to the work has taker her to the position she is currently in. She is fourty-two years of age but has exceptionally maintained her shape. She has not let the pressure of her work take a toll on her health. She understands the requirement to look out for the appearances since she is associated with front-end of the television. And she has executed her duty with perfection as of today. She dresses professionally. She opts for outfits that show off her beautiful curves and long gorgeous legs in a classy manner. Her hair and makeup are subtly done. She just looks fabulous on screen.

She has come a long way in her professional journalism career and had a successful professional life so far. Her current employers consider her valuable addition to the station. Her past track records as a journalist have impressed her new employers. She does not have a record of being fired from any previous work. She always delivered good performances at the stations she’s ever worked at. And thus they are paying with handsome amount of salary to retain her with them for a long period. She’s bringing a good amount of fortune back home. However, her net worth has not been disclosed by any source. But she is definitely earning well to provide herself with a good life. Erica is here to stay and holds the potential to make it to the top.

She married her husband David Yount back in 2005. The couples have been married for thirteen years now and are still going strong in their marital relation. Together they are the proud parents of two children. She gave birth to her first son Western Robert Yount on November 25, 2006, and welcomed her second baby son, Sawyer Steven Yount on March 23, 2010. She is perfectly balancing her work and her family life. She seems all happy with her relationship she shares with her husband. With two kids and a job at hand, she’s handling her life fabulously. It’s very less likely for her to divorce her husband.

Any other information relating to her can be obtained from wiki. She is also on the social networking sites. She has a twitter account. Her fans can follow her at EricaRHill and remain close with her.