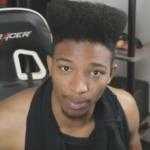 Daniel Desmond Amofah, popularly known by the name Etika is a YouTube personality. He used to post live streams, reaction videos, discussion videos, and videos about gaming on his channel. Two of his YouTube channel was banned after posting pornographic content and community guidelines violations.

Popular gaming YouTuber Etika was detained by Brooklyn Police after he allegedly threatened to harm himself live on Instagram. Around 19,000 viewers watched his live stream on Instagram. He was taken to hospital. On the live video, he was seen talking with the police and being escorted out of his Brooklyn apartment.

His live stream made "Etika" trending worldwide on Twitter. He was reportedly struggling with mental health issues and has been suicidal twice.

Where was Etika Born?

Etika was born on 12 May 1990. His birth name is Daniel Desmond Amofah. His father name is Owuraku Amofah. His mother name is currently unavailable. He was born in the United States. He holds American nationality. His zodiac sign is Taurus. He belongs to Black ethnicity. He had a brother who has already passed away. Information about his early life and education is currently unavailable.

His most viewed video on his channel was "MEWTWO DLC REVEAL !!! Etika's First Time Reaction to It!!! "MY D**K" TURN DOWN VOLUME". The video was uploaded in October 2014.

His YouTube channel was shut down in October 2018 for posting pornographic content and other community guidelines violations.

He has also been banned from Twitch after using homophobic slur on his channel.

He then again posted pornographic content on his YouTube channel. His next channel was once again terminated in April 2019.

He was reportedly suicidal twice.

Who is Etika Dating?

What are Etika Body Measurements?

There is no information about his height, weight and other body measurements available. He has dark brown eyes and his hair color is black.

What is Etika Net Worth?

Etika is a YouTube personality. His major income comes from his channel. However, his 2 channel was deleted from YouTube. His net worth is not available.