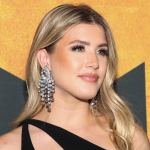 Eugenie Bouchard is a Canadian tennis player who is well recognized for becoming the first Canadian-born player representing Canada to reach the final of a Grand Slam tournament in singles at the 2014 Wimbledon Championships, finishing runner-up to Petra Kvitova. She also reached the semifinals of 2014 Australian Open and 2014 French Open. She won the Tevlin Women's Challenger in 2012. She began playing tennis at the age of five and was a member of Tennis Canada's National Training Centre in Montreal. Bouchard announced her comeback to the tour at the Wimbledon Championships in Jue 2022 for the first time since the 2021 Monterrey Open. Moreover, she won her first match in the qualifying rounds against Japan's Yuki Naito at the US Open but was knocked out in the second round by Czech player Linda Noskova, 6-2, 6-3. Eugenie also has gained a lovely fan base on her social media as she has earned more than 2.3M followers on her Instagram account and over 1.6M followers on her Twitter account.

What Nationality is Eugenie Bouchard?

Eugenie Bouchard opened her eyes for the very first time on 25th February 1994 in Montreal, Quebec, Canada. She is Canadian by nationality and Canadian-white by ethnicity. Likewise, her religious belief is in the Christian religion and her race is white. Eugenie celebrated her 28th February in 2022 and as per her birthdate, her zodiac sign is Pisces. Her father Michel Bouchard is an Investment Banker and her mother's name is Julie Leclair. She has a twin sister, Beatrice, who is six minutes older. Bouchard also has two younger siblings, sister Charlotte (born 1995) and brother William (born 1999). She and her twin sister are named after Prince Andrew's daughters, Princess Eugenie and Princess Beatrice of York.
Moving to Eugenie's education, she attended elementary school at The Study, a private girls' school.

Who is Eugenie Bouchard's Boyfriend?

Eugenie Bouchard is an unmarried woman. She was in a relationship with her ex-boyfriend Mason Rudolph with whom she got separated after two years of love life. It is believed the couple started dating in 2020 and they often shared their adventures and love for each other on social media. However, it would be no surprise to see Eugenie in a relationship in the near future as she is such beautiful. Concerning her sexual orientation, she is straight.

How much is Eugenie Bouchard's Net Worth?

Eugenie Bouchard has a net worth of $6 million as of 2022 whereas she also earns a handsome amount of salary which is around thousands of dollars per year. In 2016, she made the top 10 of the world's highest-paid female athletes, earning $6.2 million that year. She has also won prize money of $6,720,423. Eugenie signed a three-year endorsement deal with Coca-Cola, following earlier agreements with Rogers Communications and equipment sponsors Nike and Babolat. She currently uses Yonex racquets, having endorsed the Yonex VCORE 100 racquet since late 2018. In addition, her major source of income is her tennis career and she is sincere in her work.

Eugenie Bouchard stands at an ideal height of 1.80 m (5 ft 11 in) with a balanced body weight of 63 kg or 139 pounds. She has good-looking blonde hair and dark brown eyes color. Eugenie dresses up showing off her curvy figure and striking pair of legs and feet wearing either open tight upskirt. Besides, her body build type is athletic and her body measurements are 36-27-35 in or 91.5-68.5-89 cm.

Trivias About Eugenie Bouchard You Need To Know.