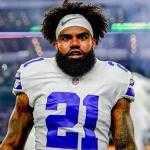 Ezekiel Elijah Elliot popularly known as Ezekiel Elliot is an American professional football player. He plays for the Dallas Cowboys of the National Football League (NFL). He plays as the running back and wears shirt number 21. Dallas Cowboys drafted him with fourth overall pick in the 2016 NFL Draft. In his rookie season in the NFL, he led the league in the rushing yards. He was also invited to the Pro Bowl following his performance in the rookie season.

Ezekiel Elliot was born on 22 July 1995. His birth name is Ezekiel Elijah Elliot. He was born to a Stacy Elliott, father, and Dawn Elliott, mother. He was born in Alton, Illinois in the United States. He holds American nationality. He has two siblings, two sisters named Lailah and Aaliyah Elliott. His ethnicity is black. His zodiac sign is Cancer. His father was a linebacker for the Missouri football team, whereas his mother was a high school state champion in three sports. He attended John Boroughs School in Ladue, Missouri. After graduating from high school, he attended Ohio State University, where he studied marketing.

In 2013, he signed with Ohio State University and played for the Buckeyes. At the end of his three seasons at Ohio State, he finished the Ohio State with 3,961 rushing yards, 43 rushing touchdowns, and 449 receiving yards and one touchdown.

His performance for the Buckeyes' win against the Wisconsin Badgers qualified Ohio State for their first-ever College Football Playoff.

He was named the Offensive MVP of both the 2015 Sugar Bowl and the 2015 College Football Playoff National Championship Game.

Dallas Cowboys selected Elliot in the first round with the fourth overall pick in the 2016 NFL Draft. He signed a four-year rookie contract with the Cowboys reportedly for $24.9 million with a $16.3 million signing bonus.

He became the starting running back ahead of veterans Alfred Moris and Darren McFadden in his rookie season.

He finished his rookie season as the NFL's top rusher with 1,631 yards and third with 15 touchdowns.

His success in his first season earned him a First-team All-Pro place.

He earned his first Pro Bowl joining Dak Prescott as the first running back and quarterback duo in NFL history to be selected.

He was suspended for the first six games of the 2017 season for violating the personal conduct policy. He was accused of domestic violence against his ex-girlfriend on five occasions in 2016.

During the suspension, he went to Mexico, trained and rehabbed his hamstrings and returned after reinstatement.

He rushed career fourth 200 plus yards against Atlanta Falcons in November 2018 and tied with DeMarco Murray and Emmitt Smith for most over 200 in franchise history.

Awards and Achievements of Ezekiel Elliott

2015 Graham-George Offensive Player of the Year

2015 Ameche-Dayne Running Back of the Year

2016 FedEx Ground Player of the Year

The young and aspiring running back is reportedly single. No rumors regarding his affairs have surfaced in the media. The 23-year old is focused on his NFL career.

After signing his rookie contract with the Cowboys, he bought his parents a new house. He was good friends with fellow Buckeye teammate Kosta Karageorge. Karageorge committed suicide by a self-inflicted gunshot wound to the head.

The 23-years old aspiring running back stands at a height of 1.83 m i.e. 6 feet tall. He has a body weight of 228 lbs i.e. 103 kg. He has an athletic body build. He has maintained his body well. He has brown eyes and his hair color is black.

Net Worth of Ezekiel Elliott

The 23-years old young running back for the Cowboys has a long way to go. His performance in the NFL has earned him wide recognition. Starting his NFL career, he signed a four-year rookie contract with the Cowboys reportedly for $24.9 million with a $16.3 million signing bonus in 2016. His reported annual salary is $16 million. As of 2018, his net worth is estimated at around $12 million.