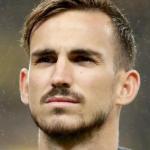 Fabian Ruiz is a Spanish professional football player. He plays as a central midfielder for the Serie A club, Napoli and the Spain national team. He started his football career at Betis in 2014 and played for Elche on loan deal in 2017. He signed with Napoli in 2018 and won Coppa Italia in 2020. On the international level, he represented Spain's youth teams before making his senior international debut in 2019.

He is known for his vision, passing, ball control, and dribbling skills.

What is Fabian Ruiz Famous For?

Where is Fabian Ruiz From?

Fabian Ruiz was born on 3 April 1996. His full name is Fabian Ruiz Pena. His birth place is in Los Paalacios y Villafranca in Spain. He holds Spanish nationality. He belongs to the white ethnicity and his religion is Christianity. His mother is Chari Pena.

Who is Fabian Ruiz Girlfriend?

Fabian Ruiz is not married. The Spanish midfielder is not single. He is dating Lulu Pride.

What is Fabian Ruiz Height?

Fabian Ruiz stands at the height of 1.89 m i.e. 6 feet and 2 inches tall. He has a body weight of 70 kg. He has an athletic body build. His eye color and hair color are dark browns.

What is Fabian Ruiz Salary and Net Worth?

Fabian Ruiz earns from his professional career as a football player. His income comes from salary, bonuses, and sponsorships. He currently plays for the Italian club, Napoli where he has an annual salary of around €3 million. The club reportedly paid his buyout clause of €30 million buyout clause to sign him from Real Betis. His net worth is estimated at around €4 million.