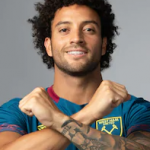 Felipe Anderson Pereira Gomes famed as Felipe Anderson is a Brazilian professional footballer. At present, he is playing for English Premier League club West Ham United and the Brazil national team as attacking midfielder. He is a quick, well-rounded, and technically gifted midfielder with a slender and diminutive but long-limbed physique. He is considered a promising and talented young player. He is predominantly known for his pace, and is regarded as one of the fastest players in the modern game. Recently, Felipe Anderson and Ogbonna enter the House of Horror (Halloween 2019).

Who are the parents of Felipe Anderson?

Felipe Anderson was born on 15th April 1993. He experienced his childhood in Santa Maria, DF, Brazil. His full name is Felipe Anderson Pereira Gomes. His nationality is Brazilian and his ethnicity is White. He is Christian by religion. As of 2019, he celebrated his 26th birthday with his friends and families. He was the youngest of five children in a poor family. One of his sisters is named Juliana Gomes. He was born to Sebastiao Tome Gomes, his father and Elza Pereira, his mother. There is no information regarding his education and early background.

How tall is Felipe Anderson?

Felipe Anderson is a very handsome and smart footballer with short black hair. His eye is also black in color. He has got a charming smile with a glowing face attracting a lot of people towards him which helps him to gain a lot of popularity as well. Felipe has got a tall height of 1.75 m which matches with his bodyweight of 70 Kg. His other body measurements are still a mystery. Neither it has been revealed by himself nor any internet websites have revealed yet. He maintains his body a lot by doing workouts and exercises. Overall, he has got a nice and healthy body.

For which team, Felipe Anderson is playing for?

How much is Felipe Anderson's Net Worth?

With the career start and debuting with the club, Santos, Felipe Anderson has achieved great heights in his career life. His experiences and his knowledge is something incredibly valuable. He would be an asset to any football team. He has been successful to grab the attention and appreciation from all the people. He has been deriving his net worth from a football career. As of 2019, his net worth is estimated to have 23 Million Euro or 19.8 Million Pound whereas his market value at present is 40 Million Euro or 35 Million Pound. In July 2018 the left-winger signed a contract with West Ham United that nets him a whopping salary of 5.2 Million Euro (4.5 Million Pound) per year.  He is highly loved and admired by his fans for his work. He is an inspiration to many aspiring footballers. Overall, he is satisfied with his earnings and he is living a standard lifestyle.

Who is Felipe Anderson's girlfriend?

It is always interesting to discuss the relationship details of footballers. Let's discuss the relationship status, affairs of this Brazilian player, Felipe Anderson here. Regarding the marital status of Felipe Anderson, he is not married yet and he is still to get married. But he is not single as well. As of today, he is in a romantic relationship with his beautiful girlfriend, Evelyn Machry. Evelyn is much more than a pretty face with a Master's degree in Business Studies. She is a self-proclaimed sports addict. Both of them respect each other and it’s visible. The duo is living a happy life as of today. His sexual orientation is straight and he is not gay.

Trivias About Felipe Anderson You Need To Know.