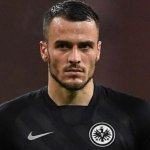 Filip Kostic is a talented Serbian professional footballer. He is well recognized for playing on the left wing for Bundesliga club Eintracht Frankfurt and the Serbia national team. His jersey number is 10. He made his senior debut with Radnicki Kragujevac in 2010 at the age of 17 and made his debut for the Serbia national senior team against Azerbaijan in a 4-1 friendly win in Sankt Polten, Austria, making way for Lazar Markovic after 56 minutes on 7th June 2015. He was also selected in the Serbian squad for the 2018 World Cup in June 2018, playing all three group stage matches. Filip is also active in social media as he has gained more than 186k followers on his Instagram account. Moreover, he scored two goals as Frankfurt defeated Barcelona 3-2 at the Camp Nou and 4-3 on aggregate in the 2021-2022 UEFA Europa League to qualify for the semi-finals on 14th April 2022.

What Nationality is Filip Kostic?

Filip Kostic took birth on 1st November 1992 in Kragujevac, Serbia, FR Yugoslavia. He holds Serbian nationality and he belongs to the Serbian-white ethnicity. Likewise, his religion is Christian and his race is white. Filip's present age is 29 which he celebrated back in 2021 and as per his birthdate, his zodiac sign is Scorpio. He has not shared any details regarding his parents and education qualification.

Who is Filip Kostic dating?

Filip Kostic is an unmarried man. He was in a romantic relationship with his gorgeous girlfriend named Milica Simic. However, the pair reportedly are separated at the moment as Kostic has already wiped out all the images of the girl from his social media. So we can surely assume that he is currently living a single life. Talking about Filip's sexual orientation, he is straight.

Filip Kostic Net Worth and Salary

Filip Kostic has a net worth of $15 million as of 2022 whereas he has also a handsome amount of salary which is around 5 million euros per year. With a tremendous amount of net worth, he is living a lavish lifestyle. In 2016, Kostic's market value was estimated at €10.00 million and currently, his market value is €20 million. Filip's highest market value was €40 million as of 11th March 2020. He uses the shoe model of Nike Hypervenom Phantom III FG since 10th July 2017. In addition, his major source of income is his football career.

How tall is Filip Kostic?

Filip Kostic is 1.84 m (6 ft 0 in) tall and his body weighs around 74 kg. He has short dark brown hair and eyes color. Additionally, his body build type is athletic. His physique combined with his perfect height and masculine look takes him to the top of the desired list in the young gen women.

Trivias About Filip Kostic You Need To Know.