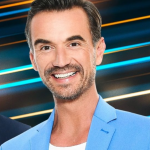 Florian Silbereisen is a German Schlager singer and show host who is well known as a television presenter of the German show "Feste der Volksmusik" since February 2004. The show airs on German broadcaster "ARD".  Silbereisen has also received recognition for being one of the judges in the 19th season of the German reality show "Deutschland sucht den Superstar (DSDS)" alongside Ilse DeLange and Toby Gad. The season premiered on 22 January, 2022. "Du schaffst das schon", "Links a Madl, rechts a Madl", "Jetzt erst recht!", "Versuch's nochmal mit mir", and "Wir tun es nochmal" are some of the songs he has published.

Besides, Silbereisen is quite active on social media sites with over 202k followers on Instagram: @floriansilvereisen.official and has over 181k followers on Facebook: @Florian Silvereisen.

What is Florian Silbereisen famous for?

Where is Florian Silbereisen from?

He was born as the son of Franz Silbereisen(father) and Helga Silbereisen(mother). His father was a businessman while his mother was a housewife. He grew up alongside his brother, Rainer, and sister, Sarina in their hometown. Growing up he often used to sing in church as well as in his junior high school's choir. From a very young age, he started taking singing lessons.

Who is Florian Silbereisen's girlfriend?

Florian Silbereisen is currently single. He has not revealed much about his personal life. The singer and TV presenter seems to be much more focused on his career than his personal life. Previously, he was in a relationship with Helene Fischer from 2008-to 2018. Helene is a German singer, dancer, entertainer, TV presenter, and actress who has won 17 Echo awards, four "Die Krone der Volksmusik" awards and three Bambi awards. At present, Silbereisen lives in Berlin, Germany.

How much is Florian Silbereisen worth?

Florian Silbereisen has quite good earnings from his profession as a singer and television presenter. Having his career started in the 1990s, Silbereisen has managed to come a long way becoming one of the known German TV personalities. Releasing several albums, and singles and presenting various TV shows for around 3 decades has surely earned him a hefty amount which is estimated to be around $1.5 million as of 2022.

How tall is Florian Silbereisen?

Florian Silbereisen is a good-looking man with a well-maintained body physique in his early-40s. He stands tall with a height of 6ft(1.83m) while his body weighs around 75kg. He has a fair complexion with brown hair and a pair of brown eyes.