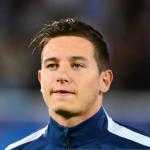 Florian Tristan Mariano Thauvin is a French professional footballer who plays as a winger for Ligue 1 club Olympique de Marseille and the France national team, having earned caps at the youth level up to the under-21 level and earning a call-up to the senior team in March 2017.

Born in Orléans, Thauvin played for youth teams at Ingre, Saint-Jean-de-la-Ruelle, Orléans, and Grenoble before rising through the ranks at the latter, and drawing the interest of larger clubs. He made his first team debut for Grenoble on 11 March 2011 in a 1-1 Ligue 2 away draw against Vannes. Grenoble was relegated to the CFA 2 after its liquidation in July 2011.

Florian Thauvin was in a relationship with his ex-fiance, Charlotte Pirroni, model and French columnist. His ex-girlfriend, Charlotte is also the second runner-up of Miss France 2015. The couple started their love affair in 2015 and after a year of their relationship, they got engaged in January 2016. However, the couple couldn’t maintain their relationship and separated in September 2017. The reason for their separation is unknown. His former girlfriend is active on Instagram with 279k followers. He shared his snaps with his ex-girlfriend pictures via Instagram. His star sign is Aquarius.