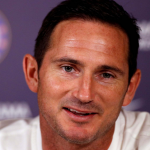 Frank James Lampard famed as Frank Lampard is an English professional football manager and former player who is the head coach of Premier League club, Chelsea. He is Chelsea's leading goalscorer. He has won a number of trophies, including three Premier League titles, a UEFA Champions League title, four FA Cups, a UEFA Europa League title, and two Football League Cups. He made his debut for England in 1999 and has represented England in the UEFA Euro 2004, FIFA World Cup in 2006,2010 and 2014 editions. Overall, he is a very talented person.

Ashley Cole admits former Chelsea team-mate Willian looked ‘rusty’ off the bench in the side’s 1-1 draw with Leicester. Mason Mount broke the deadlock in the 7th minute of the Premier League clash, dispossessing Wilfred Ndidi and finding the net before the Leicester midfielder redeemed himself with a second-half equalizer. The result means Lampard is the first Chelsea manager to fail to win any of his first three matches since Rafael Benitez back in the 2012/13 season. Willian – who sustained a knee injury at this summer’s Copa America and missed Chelsea’s entire pre-season – came on as a substitute in the 71st minute at Stamford Bridge. Brazil forward struggled with the pace of the game and lost possession on a number of occasions as the Foxes secured a hard-fought point away from home. Cole defended Lampard following the draw and argued that Chelsea was badly missing Ruben Loftus-Cheek (Achilles) and Antonio Rudiger (knee). The former left-back urged Lampard to ‘motivate’ his injured contingent back to full fitness, with the Blues already five points behind league leaders Liverpool after two matches. Lampard rejected the ‘excuse’ that Chelsea’s players were suffering from fatigue after their penalty shootout defeat to Liverpool in the Super Cup on Wednesday night.

Frank Lampard was born on 20th June 1978 to father, Frank Lampard Sr and mother, Pat Lampard in Romford, London, England. As of 2019, he celebrated his 41st birthday. He holds English nationality and his ethnicity is White. He is the youngest child of his parents and has two elder sisters named Natalie and Claire. His father was a former professional football player for West Ham United and also an assistant manager with the West Ham United. Harry Redknapp, former head coach of Birmingham City football team, is his uncle.

Frank Lampard is a very handsome footballer with an athletic body build. He has a tall height of 1.84 m with the balanced bodyweight of 90 Kg. His other body measurements will be added soon. Overall, he has got a very healthy body with a charming smile on his face attracting a lot of people towards him.

Lampard is a married person. He is married to his wife, Christine Bleakley, a TV presenter by profession with whom he tied the knot on 20 December 2015. The couple had been in a relationship from October 2009 and dated 6 years prior to their marriage. In May 2018, the couple announced that they were having their first child.

Previously, he was in a relationship with his former partner, Elen Rivas, a Spanish model and the couple has two daughters, Luna born on August 2005 and Isla born on May 2007. As of today, the couple is living a happy life without any disturbances.

Net worth of Frank Lampard

Frank is a very successful person. His annual salary playing for Chelsea football club for the 2012/13 season was estimated to be around  £7 million. Furthermore, he earned above $7 million as an annual salary from the American soccer club, New York City FC. Looking at his professional playing career, his total net worth combined with his assets is assumed to be more than $75 million. He is known to be a great investor in property, he is reported to own a home in Chelsea, four-room bedroom house in Barcelona, Spain, two houses in Cambridge as well as three apartments in London Docklands. He had also purchased a house at Surrey London that was estimated to cost around £ 4 million. In addition, he has a fleet of Luxurious cars in his collection which only highlights his massive wealth like Audi, Ferrari, Italia, F12 Sports car to name a few. The cars he purchased are assumed to cost from several hundred thousand dollars to millions. Overall, he is satisfied with his earnings and he is living a luxurious lifestyle.