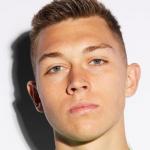 Gabriel Slonina is an American professional soccer player. He plays as a goalkeeper for the MLS club Chicago Fire. A youth product of the club, he made his MLS debut in 2021. He has made a significant appearance in the 2022 season. On the international level, he has represented the US national team at various age levels. The young goalkeeper has yet to make his senior international debut.

What is Gabriel Slonina Famous For?

Where is Gabriel Slonina From?

Gabriel Slonina was born on 15 May 2004. His full name is Gabriel Pawel Slonina. He was born in Addison, Illinois in the United States. He holds American nationality. He is of Polish descent. He belongs to the white ethnicity and his religion is Christianity. His star sign is Taurus. His Polish parents immigrated to the United States where Gaga was born. Detailed information about his parents is not available at present. He has a brother named Nick.

Who is Gabriel Slonina Girlfriend?

Gabriel Slonina is not married. The young goalkeeper is reportedly single at present. The teenager has not shared about his personal life on his social media handles.

What is Gabriel Slonina Height?

Gabriel Slonina stands at the height of 1.93 m i.e. 6 feet and 4 inches tall. He has a body weight of 88 kg. He has an athletic body build. His eye color is hazel and his hair color is dark brown.

What is Gabriel Slonina Salary and Net Worth?

Gabriel Slonina earns from his professional career as a goalkeeper. His income comes from contracts, salaries, and sponsorships. He signed his first professional contract with Chicago Fire in 2019. He was earning less than $200k there. He has reportedly agreed to sign with the English club Chelsea for a transfer fee in the region of $15 million. He will earn around $2-$3 million in salary in Chelsea. At present, his net worth is estimated below $1 million. It is likely to grow in the future.

Trivias About Gabriel Slonina You Need To Know.