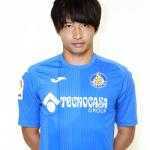 One of the popular professional football player is named as Gaku Shibasaki who plays for Spanish Club, Getafe and Japan National Team. He is a well known Japanese celebrity. He is famous for contribution to professional life. He is best at Centre midfielder position. Currently, he is playing in Getafe F.C. He had played for Kashima Antlers and Tenerife. He is right foot player. His Shirt number is 10. Molina is one of his best teammates. He had represented himself in Russia for the World Cup 2018 as a part of the national team by showing his talent to all. He is very talented and skilled player.

Passionate and enthusiastic player, Gaku Shibasaki was born on 28th May 1992. He was born and raised in Noheji, Aomori, city of Japan. He has not revealed information about his parents. His nationality is Japanese. His astrological sign is Gemini. At the small age, he began his career with football. He joined Aomori Yamada High School, where he played football for two years. He also represented Japan at the U-17 levels, from 2007 to 2009. Since his childhood, Gaku Shibasaki was passionate about outdoor sports.

Shibasaki has got a great personality. Talking about his body, his height is 1.75 m. His weight is of 64 Kg. He has a balanced body with good health. He has an attractive body figure. His smiling face and charming personality have helped him to gain the attention of all the viewers.

Shibasaki is a married man. He married Erina Mano, an actress. They tied the knot in the year 2017. They seem to be very happy with each other. The couple makes public appearances together often. There is no any sign of Separation between them. They are living peacefully.

Net Worth of Gaku

This excellent player makes good money from his work. The net worth of Shibasaki is estimated to have $4 million as of 2018. He is receiving an annual salary of $540,000 from his present club. His current market value is £1.62 million. He is satisfied with his earning.