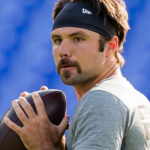 Gardner Flint Minshew II famed as Gardner Minshew is a famous and well recognized American football quarterback. At present, he is playing for the Jacksonville Jaguars of the National Football League (NFL). He began his career by playing college football at East Carolina, before transferring to Washington State, and was drafted by the Jaguars in the sixth round of the 2019 NFL Draft. Following an injury to starter Nick Foles in the first game of the 2019 season, he took over starting duties for the team. Overall, he is a very talented footballer with a charming face and leader role towards the team.

On 16th May 1996, Gardner opened his eyes for the first time in Flowood, Mississippi, the USA as Gardner Flint Minshew II. His nationality belongs to American and his ethnicity is White. As of 2019, he celebrated his 23rd birthday. He was born to Flint and Kim Minshew, his parents. Gardner’s mom, Kim, played college basketball at Mississippi State and loves seeing her son defy the odds. Prior to Gardner getting drafted, Kim admitted that it is a bit surreal to think of her son as an NFL quarterback. One of the most intriguing parts of Gardner’s story is that there is no Gardner Minshew I. Gardner’s dad, Flint, simply wanted his son to be Gardner II which is the official name listed on the Jaguars website. Things could have been even more interesting if Gardner’s grandfather, Billy Minshew, had his wish. He also has a sister named Callie. Talking about his education, he went to attend Brandon High School and later went to Washington State College.

Gardner is a very handsome footballer with an athletic body build. He has got a very charming smile with an attractive body style. He attracts a lot of people towards him with his nice attitude. He has got a tall height of 1.85 m or 6 ft 1 in with the bodyweight of 102 Kg or 225 lb. His other body measurements have not been revealed by any sources but it will be added soon once we get details.

Gardner is very young to get married as he is only 23. He is unmarried yet neither he is dating someone. He is single at present. As there is also no rumors about his dating history with anyone. At present, he is living a happy life without any disturbances and he is focusing mainly on his football career leading the team. He is not gay and his sexual orientation is straight.

Net Worth of Gardner

Gardner Minshew’s salary is quite a bargain at $495,000 for the 2019 season, per Spotrac. He signed a four-year,$2.7 million contract with the Jaguars after being selected in the sixth round of the NFL draft with the 178th overall pick. His contract reflects his initial role as a backup quarterback but is more indicative of the salary structure for late-round picks. For comparison’s sake, the Jaguars just signed Nick Foles a four-year, $88 million contracts this offseason while Foles is making $5 million this season, but it will bump up to $15.1 million for 2020. Minshew did receive a $190,884 signing bonus that was fully guaranteed, per Spotrac.