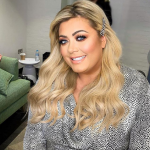 An English television personality, Gemma Collins has achieved huge fame all on her hard work and intelligence. No doubt she is talented and her talent has led her to the summit of success. She has risen to prominence from the ITVBe semi-reality program The Only Way Is Essex. Today she is one of the successful actresses who has not only achieved success but also has inspired many people with her achievements.

Gemma Collins was born as Gemma Clare Collins in Romford, London, England. Her nationality is British and ethnicity is English. Her zodiac sign is Aquarius.

Moving towards her education, Collins went to the Sylvia Young Theater School when she was a child and starred in a production of The Sound of Music.

Gemma Collins has been involved in a number of high-profile relationships ever since she came onto the scene. She does not shy away from posting pictures about her love life, and she is open about her relationship in the media. However, her most notable relationship was with her current partner and co-star on The Only Way Is Essex, James Argent although, there are no details about how the couple first met

Recently, James came in support of his girlfriend when the fans criticized her falling incident publicity and called them idiots for their poor thinking. The lovebirds have been together and are reportedly co-owners of a house in Italy.

Gemma Collins is thought to be worth a whopping £2.7 million.

Part of this will likely come from TOWIE, but she has also had a number of other TV roles, including Splash!, I'm A Celebrity, and Celebrity Big Brother (as well as Diva Espana, of course).

This year has been a big one for Gemma, with a book, a collaboration with Boohoo, and a spot on an Orange Is The New Black promo video.

Trivias About Gemma Collins You Need To Know.