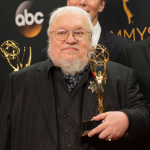 George R.R. Martin is an American short story writer and novelist in the science fiction genres, a television producer and screenwriter. He is best known for the bestseller series, A Song of Ice and Fire, which was later adapted into a television series, Game of Thrones, by HBO. George currently serves as the co-executive producer for the TV show and has scripted four episodes. In 2005, he was named as "the American Tolkien" and one of the"most influential people in the world" by the Time magazine.

What is George R.R. Martin known for?

Where is George R.R. Martin born?

Back to his early life, George was born in Bayonne, New Jersey, the U.S. His father was Raymond Collins Martin, a longshoreman, and his mother was Margaret Brady Martin. He has two sisters, Darleen Martin Lapinski, and Janet Martin Patten. His birth name is George Raymond Martin.

George’s father was of half Italian descent and his mother of half Irish ancestry. The family moved to the Bayonne Docks in 1953. George attended the Mary Jane Donohoe School and the Marist High School. George did his B.S. and M.S. in journalism from Northwestern University.

When did George R.R. Martin pursue his writing career?

To whom George R.R. Martin was married?

George has been married twice thus far in his life. His first marriage was to Gale Burnick and that was in 1975. Before meeting Gale and marrying her, he had also dated another writer, Lisa Tuttle for some time. His marriage which had Bridge Over Troubled Waters as the wedding song did not last long as it ended only 4 years later in 1979.

After his marriage to Gale Burnick crashed, he would go on to marry Parris McBride in 2011. The two met as far back as 1975, but it was until in the 1980s that they began dating. Before they decided to get married, the two had been living together for many years.

It gets very interesting to note that with both his first wife, Gale Burnick and Parris McBride who was his partner for a long time before settling down as man and wife, George does not have any kids. In fact, he has never had any children in his entire life.

Together with his wife, Parris McBride, George now lives in New Mexico where he has been for a long time.

How much is George R.R. Martin net worth?

Despite being named one of the Highest Earning Authors in the world today. He has estimated net worth somewhere around $80 million. Similarly, He has a $25 million salary per year. As of now, Martin lives a surprisingly simple and frugal lifestyle with his wife.

How tall is George R.R. Martin?

A rich bearded and grey-haired individual who has since gone past the mid ages, the writer is not necessarily a man of much height even though he is well built. His actual height is 5 feet 6 inches (1.68 m). That said, his weight or general body measurements are still unknown.