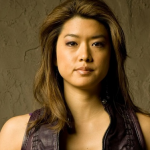 An American, as well as Canadian Actress, is popularly famed as Grace Park. She has gained the recognization as Sharon "Boomer" Valerii and Sharon "Athena" Agathon on Battlestar Galactica, as well as Shannon Ng in the Canadian television series teen soap "Edgemont". Grace starred in the CBS television series "Hawaii Five-0", from 2010 until 2017.

Playing as Lt. Sharon "Boomer" Valerii and Lt. Sharon "Athena" Agathon in the military science fiction series Battlestar Galactica from 2004 to 2009, and as Kono Kalakaua in the action police procedural series Hawaii Five-0.

Grace took birth on 14th March 1974. She was born in Los Angeles, California, the U.S. Her nationality is American Canadian. Her hometown is Vancouver, British Columbia, Canada. She graduated from Magee Secondary School in 1992 and holds a degree in psychology from the University of British Columbia. Her sun sign is Pisces.

Grace is a married woman. She was married to Phil Kim in the year 2004. The couple is also blessed with one child. The couple is living very happily and there is no sign of separation between them.

Net Worth of Park

The net worth of Grace Park is estimated to have around $10 Million as of 2018. She is satisfied with her earning.

Grace is not engaged in any social media.

Trivias About Grace Park You Need To Know.