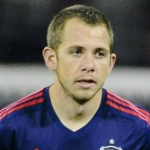 A Former American Soccer Players who played for Seattle Sounders Football Club for three-season with 10 goals and seven assists and Harry was a finalist for the AT&T Rookie of the Year in 2014 with the Chicago Fire. Harry was honored with several titles on his football career, the "Atlantic Coast Conference Men's Soccer Offensive Player of the Year" award in 2013, Capital One Academic All American of the Year for Men's soccer, and many more during his career. He starts his career playing for the Official youth soccer of the Chicago fire, "The Chicago Fire Juniors North" when he was in high school. He played as a Midfielder all the games. The last club he played for was Seattle Sounders Fc where he attends three-season and announced retirement from professional soccer on Tuesday, June 16, 2020.

A former American football player was born on November 7, 1991, in Lake Forest, Illinois, United States of America. Harrison Shipp is his birth name. He is an American Nationality and holds American Citizenship. He is from white Ethnicity. There is no information disclosed about his family but said that he has three siblings, two sisters, and one brother. Abby Shipp and Sammy Shipp are his sisters and Micheal Shipp is his brother who played soccer with him at Notre Dame Club and he is the younger brother of his family. He has gone to Lake Forest High School for his education and he resigns from a football career to do his MBA at Northwestern university's Kellogg School of Management. His zodiac sign is Scorpio and he is Christian by his religion.

Shipp is a married man and he is straight to sexual orientation. At the end of 2016, Harry proposed to his long-time girlfriend Maria Kosse, whom he met while at Notre Dame. There is no information about his marriage date but says that they were married somewhere in the year 2018.

How tall is Harry Shipp?

As he was a professional football player, he has an athletic body. He is 1.75m tall and weighs 75kg. He has a light brown color of Hair and brown hazel is his eye color.