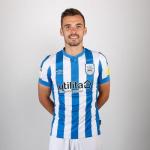 Harry Stefano Toffolo is an English professional football player who plays for Championship club Huddersfield Town as a left-back. He started playing football for the youth team of Norwich City in 2008 and began his career at the club. He has previously played for five clubs on loan: Swindon Town, Rotherham United, Peterborough United, Scunthorpe United, and Doncaster Rovers. He then played for Millwall and Lincoln City. Currently, he is playing for Championship club Huddersfield Town.

What is Harry Toffolo famous for?

Where is Harry Toffolo from?

Looking at his personal life, he is a married guy. He got married to his beautiful girlfriend, Annie Bell who have been together for a long time. The couple is blessed with three children: Luca, Enzo, and Sienna. He has an intimate relationship with his wife and children where they are living their life happily together.

Harry Toffolo stands at a height of 1.83m i.e. 6 feet and 0 inches tall. He has a bodyweight of 71kg. He has an athletic body build. His eye color and hair color are brown. His sexual orientation is straight.

Harry Toffolo Net Worth and Salary

Harry Toffolo earns from his professional career as a football player. His income is from contracts, salaries, bonuses, and endorsements. As of 2021, his estimated net worth is around $1 million $5 million and his salary is £390,000. His market value is around €2 million.