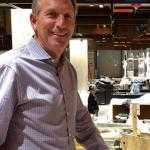 Howard Schultz is an American businessman. He was the CEO of American coffee company, Starbucks. He became the CEO of Starbucks twice, from 1986 to 2000 and again from 2008 to 2017. He was a member of the Board of Directors at Square, Inc. and is also a former owner of the Seattle SuperSonics.

The former Starbucks CEO, Howard Schultz announced via tweets that he is considering to run for the 2020 presidential election as a centrist independent candidate.

He wrote, "I love our country, and I am seriously considering running for president as a centrist independent".

He wrote in his another tweet, " This moment is like no other. Our two parties are more divided than ever. Let's discuss how we can come together to create opportunities for more people. #ReimagineUS".

He also appeared on 60minutes with Scott Pelley to discuss his childhood, business, and thoughts about the country. And the current President of the United States has responded via a tweet to Schultz's announcement to run for President.

He ripped Schultz saying, "Howard Schultz doesn’t have the “guts” to run for President! Watched him on @60Minutes last night and I agree with him that he is not the “smartest person.” Besides, America already has that! I only hope that Starbucks is still paying me their rent in Trump Tower!".

Howard Schultz was born on 19 July 1953. He was born to a father, Fred Schultz, and a mother, Elaine Schultz. He was born to a Jewish family. His birthplace is in New York City, New York, in the United States. He holds American nationality. He has 2 siblings, Michael Schultz, a brother, and Ronnie Schultz, a sister. He grew up with his siblings in the Canarsie Bayview Houses of the New York City Housing Authority.

He attended Canarsie High School. After graduating from high school in 1971, he enrolled at the Northern Michigan University. He graduated with bachelor's degree in speech communication in 1975.

After graduation from the Northern Michigan University, he worked as a salesman for Xerox Corporation, where he was promoted to a full sales representative in a very short period of time.

He became the general manager for Swedish drip coffee maker manufacturer, Hammarplast in 1979.

He joined Starbucks Coffee Company as the Director of Marketing in 1983.

He visited Italy and got a new idea to expand Starbucks, which the owners refused. And he decided to leave Starbucks in 1985.

The $400,000 he needed to open the first store and start a business, his previous company, Starbucks owners, and a doctor help him raise the money.

In 1986, he opened his first store, "II Giornale" with Italian experience. It was named after the Milanese newspaper of the same name.

Schultz renamed II Giornale as Starbucks and rapidly expanded it across the country.

Starbucks had its initial public offering and trading of its common stock under the stock ticker NASDAQ-NMS: SBUX in June 1992.

Schultz stepped down as CEO of Starbucks in June 2000 and took the new position of chief global strategist to help the company expand internationally.

Schultz returned as the CEO of Starbucks in January 2008 while its sales were declining.

He again stepped down as CEO in December 2016 and took the position of executive chairman.

In June 2018, he announced he would leave all positions at Starbucks.

He stepped down from the board of Square in November 2013.

He is also a significant stakeholder in Jamba Juice.

Seattle SuperSonics and the Seattle Storm

He was criticized for running the franchise as a business rather than a sports team.

He sold the team to Clay Bennett for $350 million.

In 1997, Schultz wrote the book, Pour Your Heart Into It: How Starbucks Built a Company One Cup at a Time with Dori Jones Yang.

His second book, Onward: How Starbucks Fought for Its Life Without Losing Its Soul was published in 2011. Joanne Gordon co-wrote the book.

His third book, For Love of Country, was published in 2014. Rajiv Chandrasekaran co-wrote the book.

In 1999, he was awarded National Leadership Award for philanthropic and educational efforts to battle AIDS.

In 2004, University of Manitoba awarded him with International Distinguished Entrepreneur Award.

In 2007, he received the FIRST Responsible Capitalism Award.

In 2011, Fortune Magazine named him Businessperson of the Year for his initiatives in the economic job market.

In 2017, he was awarded an honorary Doctor of Humane Letters degree by the Arizona State University.

The same year in November 2017, he was awarded the National Equal Justice Award by the NAACP Legal Defense and Educational Fund.

Schultz and his wife co-founded the Schultz Family Foundation in 1996 which supports two national initiatives, Onward Youth and Onward Veterans.

Net Worth, Source of Income, Starbucks

As of 2019, his net worth is estimated at around $3.4 billion. He has acquired a one-dollar salary policy, where a number of top executives in large business and government works without direct compensation, but for legal reasons must receive a payment above zero. He was the 232nd richest person in the United States with a net worth of $3.1 billion, according to Forbes in 2016.