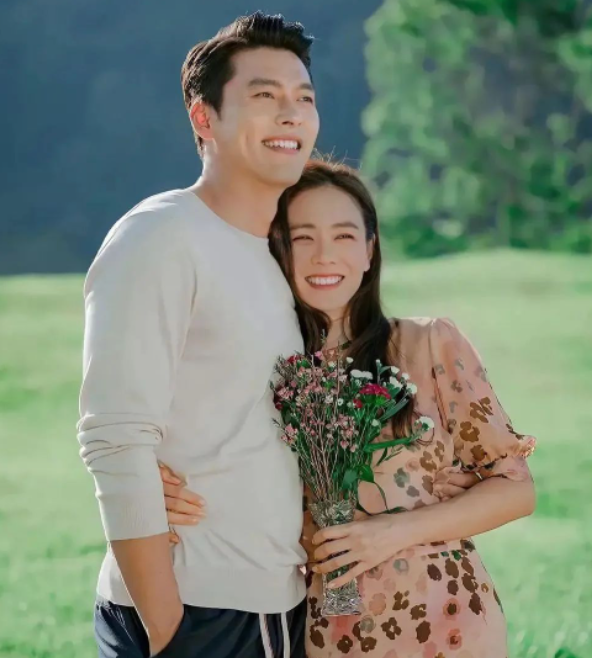 Have you ever had a lovely dream about your life, precisely your romantic life, as in Korean dramas? If that's the case, your romantic expectations are high, and you've been waiting for the ideal, gorgeous, wealthy man to come.

Isn't this something out of a story? But wait, the perfect pair Hyun Bin and Son Ye-jin, who starred in the drama "Crash Landing On You", have made this fantasy a reality.

With the drama released in 2020, fans wished the couple to date for real making several fan clubs, then, we dove into the year 2021 with the news of the couple dating officially, and now finally in 2022, the big news of the couple getting married for forever.

For those curious about how and when the pair met, started dating, who they are, and everything, let's get to know.

Something that began as a "ship" of the ideal fiction couple on "Crash Landing on You", known as "BinJin" or "RiRi", the couple has turned into a happily ever after fairy tale with their romance blooming in just 2 years. Even being considered to be the "Wedding of the Century", their wedding was attended by A-list guests all-around to them wearing designer dresses.

The couple had a fairy tale wedding ceremony which took place on March 31, 2022, at the luxurious venue Aston House at the Grand Walkerhill Hotel in Seoul, under tight security and Covid-19 safety protocols.

Son walked down the aisle dressed in a Mira Zwillinger couture gown on the arm of her father while Hyun Bin was in a dashing black suit. She walked down the aisle to the beautiful song, "Can't Help Falling in Love" also the couple was serenaded by K-pop stars including Gummy, who sang IU’s "I Give You My Heart", a song from "Crush LAnding on You".

About 200 friends and family members were invited to the exclusive where the guests were treated to a sumptuous three-course menu in which the main course included grilled beef tenderloin, grilled lobster, and seafood noodles.

Among the A-list guests there were actors Gong Yoo, Jung Hae-in, Song Joong-ki, Ji Jin-hee, and Jang Dong-gun, actresses Ha Ji-won and Jeon Mi-do, Girls' Generation's Yoona, and rom-com queen Gong Hyo-jin, Gong who has been a long-time friend of the bride, was the one who caught the bridal bouquet.

Their wedding made headlines all over Korea even reaching out to several other countries.

It was also reported that Son and Hyun weren't going for a honeymoon after their wedding as they plan to spend their first weekend as newlyweds at their penthouse in Guri city in Gyeonggi Province.

Who is Hyun Bin?

Hyun Bin(Kim Tae-pyung), a South Korean actor who has been an ideal man for several women all around the world, is considered to be one of the country's highest-paid and most influential actors.

Initially gained wide recognition for his role in the 2005 romantic comedy television drama, "My Name is Kim Sam-soon" at the age of 23, Hyun Bin has marched towards the success path ever since.

Holding a Master's degree from the Chung-Ang University in Theatre Studies, Hyun has worked on a series of box office hits, "Confidential Assignment"(2017), "The Swindlers"(2017), "The Negotiation"(2018), "Rampant"(2018) other including the drama, "Crash Landing on You", "Secret Garden", "Memories of the Alhambra".

The success of Hyun Bin's works internationally established him as a top Hallyu star.

Who is Hyun Bin's wife?

She rose to fame initially with "The Classic" and "Summer Scent", garnering her the title "Nation's First Love" in Korea. Her other acclaimed roles include Alone in Love (2006), My Wife Got Married (2008), The Pirates (2014), The Truth Beneath and The Last Princess, and The Negotiation(2018).

Son co-starred alongside Hyun on the global hit romance drama, "Crash Landing On You"(2020), on the same set where the couple started dating both on-screen and off-screen. The drama which had Son and Hyun as the leading star went on to become the third-highest-rated Korean drama in cable television history.

Besides, Son is set to have her Hollywood debut in 2022 opposite Sam Worthington in filmmaker Andrew Niccol's upcoming work, "The Cross".

Officially worked together in 2017

They started working on "Crash Landing On You" in 2020

Confirmed their relationship on Jan 1, 2021

Kept a secret about their relationship in the mid-2020

As confirmed by the agencies, they started dating in 2020, which means that the two already were a thing when they attended the 56th Baeksang Arts Awards on June 5, 2020. They sat next to each other and both received the “Tiktok Popularity Award”, following the success of Crash Landing On You.

They even went on to Instagram about their relationship.

Son Ye-jin took to Instagram to update her fans on her relationship status. She uploaded a beautiful flower arrangement along with a beautiful message confirming to the fans that she is “thankful to have met a good person” and that she will work hard on the relationship.

“The new year is here. For the first time, I’m writing about something personal instead of work. I wonder why I feel so embarrassed... Hmm… Yes, things turned out that way.. ^.^ haha… mhmm..^^; I don’t know what to say, but I feel like I have to say something to everyone... It feels so awkward and strange..^^; I’m thankful to have met a good person and I’ll tend (to the relationship) with care…  I’ll always remember all your love and support and keep it close to my heart... I hope that this new year brings even better things to everyone. Please stay healthy. Ppyong ”

Hyun Bin, 39, and Son Ye-jin 40 are officially husband and wife and are one of the most good-looking and powerful couples in Korea.

Who is Robin Roberts partner Amber Laign? About Their Relationship