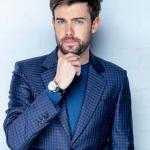 Jack Peter Benedict Whitehall popularly known by the name Jack Whitehall is an English comedian, television presenter, actor, and writer. He rose to prominence for his stand up comedy. He is best known for starring as JP in the TV series, Fresh Meat and Alfie Wickers in Bad Education. He is also known for the spin-off film, The Bad Education Movie. He is the host of the BRIT Awards since 2018. He was nominated for British Comedy Awards for "Best Comedy Breakthrough" in 2011 and has won King of Comedy, British Comedy Awards in 2012.

Who are Jack Whitehall's parents?

Jack Whitehall was born on 7 July 1988. His birth name is Jack Peter Benedict Whitehall. He was born to a father, Michael John Whitehall and a mother, Hilary Amanda Jane Whitehall. He belongs to White ethnicity. His father is a television producer and a former agent, whereas his mother was an actress. He was born at the Portland Hospital in City of Westminster, London in England. He holds English nationality. His zodiac sign is Cancer. He has 2 siblings, a brother, Barnaby William, and a sister, Molly Louisa.

He attended Tower House School in East Sheen, west London. He then attended the Dragon School in Oxford and Marlborough College in Wiltshire later. He took a year break to pursue a stand-up comedy career. He later attended the University of Manchester for two terms only to study History of Arts.

He made his television debut in a comedy-drama television series, The Good Guys in 1993. He was 5 years old then. He has appeared in minor roles in other series including, Noah's Ark, Have I Been Here Before?, Little Crackers, and Ruddy Hell! It's Harry and Paul.

He landed the main role in a British comedy-drama television series, Fresh Meat, where he appeared as JP between 2011 and 2016.

His another major role as Alfie Wickers landed in a British television sitcom, Bad Education. He appeared in the sitcom from 2012 to 2014.

He presented the first and the twelfth week of Big Brother's Big Mouth on E4 in 2008.

He has appeared on Channel 4's 8 Out of 10 Cats in several occasions.

In June 2009, he co-presented topical-satire series The TNT Show with Holly Walsh on Channel 4.

In August 2009, he appeared on Charlie Brooker's Channel 4 panel show, You Have Been Watching.

He made his first appearance on BBC Two satirical panel show, Mock the Week. He has since then appeared on it on several occasions.

He made a guest appearance in an episode of Never Mind the Buzzcocks.

He has appeared in several other television series such as The Life of Rock with Brain pern, An American Education, Inside No. 9, Cockroaches, Drunk History, and Decline and Fall.

He honored Big Brother presenter Davina McCall on the Channel 4 show A Comedy Roast in 2010.

He headlined the second episode of Dave's One Night Stand in October 2010.

He was featured on Comedy Central Presents Jack Whitehall in the United States in February 2011.

He landed a six-part entertainment series on Channel 4, Hit the Road Jack in 2012. He went on a comedy tour of the country in the same year.

He became a regular panelist for the fifth series of A League of Their Own on Sky 1 in 2012.

He was guest chairman of Have I Got News for You in November 2012.

He presented a travel documentary series, Jack Whitehall: Travels with My Father in 2017. In the series, his father Michael Whitehall spent five weeks in Thailand, Cambodia, and Vietnam.

He became the host of BRIT Awards since 2018.

He won the Amused Moose Laugh Off 2007. He was also the runner-up in the Laughing Horse New Act of The Year competition in So You Think You're Funny?.

He won the Charlie Harthill Special Reserve in 2007.

He was nominated for 'Best Newcomer' in Chortle Awards in 2008.

He was a finalist in the Hackney Empire New Act of the Year in 2008.

He performed his solo stand-up show, Nearly Rebellious at the Edinburgh Festival Fringe in August 2009.

He was nominated for 'Best Newcomer' at the Edinburgh Comedy Awards in 2009.

He was accused of stealing Stewart Lee's stand-up routines in September 2009.

Robbie Williams was accused of stealing one of Whitehall's jokes in his much-publicized "comeback" performance as part of the BBC's electric proms at the Camden Roundhouse in October 2009.

He appeared on the debut episode of Stand Up for the Week in June 2010.

He was nominated for 'Best Comedy Breakthrough' by the British Comedy Awards in January 2011.

He set a new Guinness World Records title together with Dara O Briain and Jon Richardson for hosting the 'Highest stand up comedy gig in the world' on a British Airways flight in support of Comic Relief in March 2011.

He performed two shows at the Edinburgh Festival Fringe in August 2011.

He has also performed a series of four stand-up shows, Backchat, with his father.

He has appeared in the first series of Dave's One Night Stand for the comedy network Dave.

He performed two sell-out solo shows at the Hammersmith Apollo in November 2011, which completed his debut national tour, Let's Not Speak of This Again.

He appeared on The Big Fat Quiz of the Year in December 2012, where he made a joke about Queen Elizabeth II. It created controversy and National Television Awards publicly stated that Whitehall would not be forced to resign from presenting the awards a short time later.

He appeared in a British comedy film, The Bad Education Movie in 2015. It was his theatrical film debut. He was also the writer of the film.

He had a voice role in the 2016 film, Asterix: The Mansions of the Gods.

He appeared as Harlequin in the 2018 American fantasy adventure film, The Nutcracker and the Four Realms.

His upcoming movie is Jungle Cruise, scheduled to release in 2020.

What is Jack Whitehall net worth?

The English comedian Jack Whitehall has earned his fortune working in the entertainment industry. Comedy is his forte. He earned mostly from comedy. He has appeared in tv commercials for Jaguar and Samsung. As of 2019, his net worth is estimated at $4 million.

Trivias About Jack Whitehall You Need To Know.