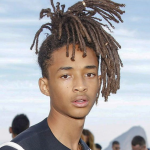 The Dynamic and very talented Jaden Smith is young just twenty turned actor, rapper and dancer of America. The son of the Hollywood actors Will Smith and Jada Pinkett Smith is widely renowned for his remarkable performance in the remake of Karate Kid. He is considered one of the successful Hollywood celebrity kids. Coming up from the showbiz family, it was easy for him to adopt the Hollywood trends but it was all his hard work and effort that has made him able to enrich at the great peak where only few can reach. With the strong inclination towards acting from an early age, he made his first acting debut at the tender the age of 8 in "The Pursuit of Happiness" in 2006 alongside his father Will Smith. Since then, he has been able to establish himself as a rapper, singer and actor. He also acted in the 2008 remake of The Day the Earth Stood Still and the 2010 remake of The Karate Kid, and was in the 2013 film After Earth with his father.

Jaden Smith Says Tyler The Creator Is His "Boyfriend". During a recent concert, Jaden Smith showed that he doesn’t give a fuck about what you, your barber, uncle or cousin think and revealed that he and Tyler, the Creator are a thing. Jaden got on that stage and professed his love for the Oakland rapper with such excitement and pride. Presuming Tyler is someone’s top, I too would be excited seeing as though tops are an endangered species in the gay community. #BringBackOurTops. Smith took to Twitter to double down on his proclamation and Tyler’s response neither confirms nor denies that the two would be sharing “his & his” towels in the near future.

On 8th July 1998, Jaden Smith was born as Jaden Christopher Syre Smith in Malibu in California. His nationality is American. He was born to Will Smith and Jada Pinkett Smith, his parents. He also has an older half-brother named Trey Smith and a younger sister named Willow Smith. His ethnicity is Black. His birth sign is Cancer.

His exposure to acting was at a very young age so this led his parents to keep him along with his sister Willow Smith who was home-schooled. But he also attends his parent's foundation New Village Leadership Academy.

Standing at the height of 5 ft 8.5 inches, he is in 20 years of his age. This charismatic son is often encountered with his shirtless father along with other members of his family hitting the beach of several countries. It’s not only his acting or voice that is famous among his fan but his different haircuts such as French Prince Style haircut, short curly haircut are also famous among his fans. He has a balanced weight of 65 Kg and his shoe size is 8 (US). His sexual orientation is straight.

Net Worth of Smith

With his successful career as singer, rapper, designer, and actor this wonder kid has earned his net worth of $ 15 million as of 2018. He is earning a good amount of money. His exact salary has not been revealed yet and will be updated soon but there is no doubt in the mind of his follower that he is earning a considerable amount of money from his work.

Taking about his dating and relationship, he once dated Stella Hudgens sister of Vanessa Hudgens but now his rumored girlfriend name is Kylie Jenner daughter of Kris Jenner. The couple is assumed to be dating each other after they were spotted cuddling each other in concert and most recently in West Hollywood when he clasped gold neck piece around her neck. However, the news isn’t confirmed by both but we all know if there is no fire there is no smoke.

In April 2017, he was first seen kissing actress Odessa Adlon on Miami Beach. They are still going strong. The couple is enjoying their life happily.

The more and additional information about him can be obtained from his personal as well as official sites. His biography is also available on Wiki. This young actor can also be followed on Twitter as it has become one of the convenient ways to reach out to the desired person. The good news is that he has maintained twitter account. To add an interesting piece of information about him, he made his appearance several times in television series All of Us in 2003 as well as 2004. His parents were the prime supporter of the creation of the show.