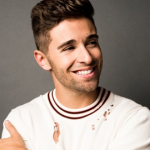 Jacob Harris Miller famed as Jake Miller is an American pop rapper, singer and songwriter from Weston, Florida, United States. He released his debut album "Us Against Them" on 5th November 2013. He also began as the support act on 19th August 2016 for Fifth Harmony's The 7/27 Tour, Miller's 7-song EP titled Overnight was released. He released his second album, 2:00 am in LA and third album, Silver Lining on 9th March 2018. He has also released seven EPs till date, all of which have garnered considerable popularity. He is a very talented singer as well as a good songwriter.

Jake Miller was born on 28th November 1992. As of 2018, he will be 26. He was born in Weston, Florida, the U.S. His nationality is American. His sun sign is Sagittarius. He was born to Bruce Miller and Lee Miller, his parents. Talking about his siblings, her name is Jenny Miller. His ethnicity is White.

Regarding his education, he was enrolled at the University of Miami. However, he dropped out of university after one semester to focus on his burgeoning music career.

Jake is not married yet and he is still to get married. He is currently focusing on his career rather than being in a relationship. He is enjoying his life a lot being single. He is very happy with his single life.

Previously, he dated YouTube personality, Madison Bertini for 8 years and later the couple breaks up. He has not spoken about his break up with Madison. He is also a very secretive person regarding his private life.

Net Worth of Jake

Trivias About Jake Miller You Need To Know.