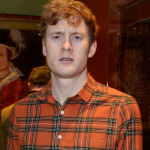 James Acaster is an English stand-up comedian and television presenter who performed for several consecutive years at the Edinburgh Festival Fringe. His 2012 act "Prompt" was even nominated for an Edinburgh Comedy Award also for Best Show award five times.

With his "Cold Lasagne Hate Myself 1999", he won the Melbourne International Comedy Festival Award for Most Outstanding Show in 2019. He has appeared on several panel shows; "Mock the Week", "Taskmaster", "8 out of 10 Cats", and "Would I Lie to You?".

He currently hosts the panel show, "Hypothetical", "Off Menu" and the music podcast, "James Acaster's Perfect Sounds". Besides, he also has written two books that have appeared on The Sunday Times Bestseller List: "James Acaster's Classic Scrapes"(2017) and "Perfect Sound Whatever"(2019).

With his up growing popularity, he has managed to have his own Twitter account: @JamesAcastor with over 26k followers and on Instagram: @nocontextjamesacaster with over 87k followers.

What is James Acaster known for?

What school did James Acaster go to?

James Acaster was born on January 9, 1985, in Kettering, Northamptonshire, England. His birth name is James William Acaster. His nationality is British. Acaster belongs to the White ethnicity while Capricorn is his zodiac sign.

Born and raised in his hometown, he attended Montagu Secondary School after which he went on to study music at Northampton College. During his time at the university, he also worked at a drinks stand at Wicksteed Park, also worked as a teaching assistant in a school for autistic children.

It was during this time he used to play drums in bands including The Wow! Scenario and the Capri-Sun Quartet after then he began to perform stand-up comedy.

How did James Acaster become famous?

James Acaster is currently single and isn't dating anyone at the moment. He previously was in a relationship with Rose Matafeo, a popular New Zealand comedian, actress, and TV presenter who is well known for her performance on NZ late-night comedy sketch show, "Funny Girls". The couple dated for 4 years from 2014 till 2017.

Before Rose, he was in a relationship with comedian Louise Ford until 2013.

How much does James Acaster earn?

James Acaster has quite good earnings from his profession as a stand-up comedian and television presenter. Having his career started initially as a drummer in bands, James has managed to come a long way up becoming one of the popular comedians as of 2021. Winning several awards and presenting on several shows, James has surely amassed a healthy fortune estimated to be around $1.5 million.

What height is James Acaster?

James Acaster is a good-looking man with a well-maintained athletic body physique in his 30s. He stands tall with a height of 6ft. 1inches. while his body weighs around 75kg. He has a fair complexion with dark brown hair and a pair of brown eyes.