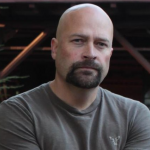 Jason Hawes is an American author, TV host, and producer who has a deep emotion toward paranormal phenomena. Thus, he founded Rhode Island Paranormal Society (RIPS) to support those people who had paranormal experiences. Later. he produces the TV series, Ghost Hunters which was based on paranormal activities. After the huge success, he appeared in different TV series and films which are listed below.

Besides these, he is also a plumber and started a plumbing business in his early days. During his career, he has written several books which are also based on paranormal activities. You can find his written books details on the below page. Do you know that his email is used for threatening then-president Gorge W. Bush?

What is Jason Hawes famous for?

When was Jason Hawes born?

Jason Hawes was born in 1971 to his parents. Currently, he is aged 50 years old and his birthdate is December 27. He is from Canandaigua, New York, USA but currently resides in Rhode Island, USA. He holds American nationality and belongs to the White ethnicity. His zodiac sign is Capricorn. The information regarding his parents and siblings is yet to be revealed. Further, He was graduated from Toll Gate High School in 1990. His further study details are yet to be disclosed.

What is Jason Hawes doing for a living?

During his career, he has written various books as well which are listed below:

Who is Jason Hawes married to?

Jason Hawes was happily married to his longtime girlfriend, Kristen Cornell. After dating a long time, the couple exchanged their wedding vows on May 20, 1998. Together, the couple blessed five children. They are Samantha, Haily, Satori, Austin, and Logan. Currently, the couple lives blissful life with their children in Rhode Island, USA.

Further, he had received some threatening emails in March 2005. Later, the hacker used his email to threaten then-president George W. Bush. He immediately alerted the FBI in Providence. Later, the hacker was arrested and sentenced to two years in federal prison in January 2006. The hacker's name is Barry Clinton Eckstrom. Later in 2010, he lost 15.8 kg weight on his own without any trainer and assistance.

Furthermore, He has used public ghost hunting events and personal experiences to raise money for various charities, such as the Shriners Hospitals for Children and Cure Kids Cancer.

How much does Jason Hawes earn?

Jason Hawes is a part of the entertainment industry for a long time. He has appeared in several TV shows and even produced them. Thus, he probably earned an impressive amount of money throughout his profession to date. Based on some online sites, his current estimated net worth is said to be $3 million. However, his salary and other financial details are yet to be disclosed.

How tall is Jason Hawes?

Jason Hawes has an athletic body with a height of 6 feet 1 inch and he weighs around 83 Kg. Similarly, he has pair of brown eyes and he is bald. Further, his other body information is yet to be disclosed. In the case of disclosure, we will let you know.

Trivias About Jason Hawes You Need To Know.