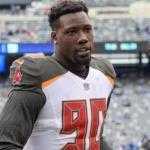 Jason Andrew Pierre-Paul, professionally known as Jason Pierre-Paul or JPP is an American football outside linebacker. He currently plays for the Tampa Bay Buccaneers of the National Football league (NFL). The New York Giants drafted him in the first round of the 2010 NFL Draft. He has won Super Bowl XLVI and made two Pro Bowls with the Giants. He played college football at South Florida. 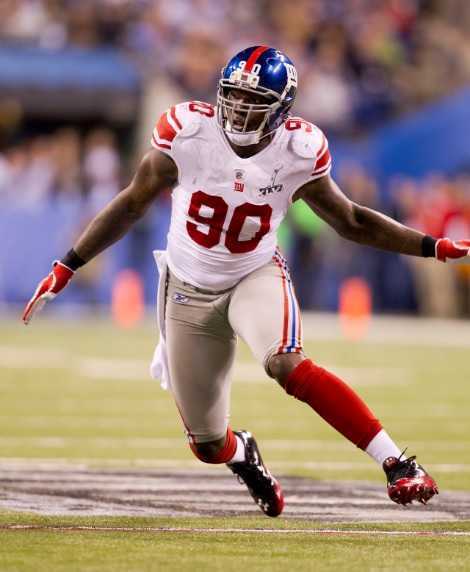 He suffered a neck fracture in a single-car accident.

What is Jason Pierre-Paul Famous For?

Where was Jason Pierre-Paul Born?

He attended Deerfield Beach High School, where he played basketball. He suffered a serious leg injury while playing basketball. He then took football in his junior year.

He enrolled at the College of the Canyons in California, where he played college football. He earned First-Team All-WSC and All-American honors there.

He then transferred to Fort Scott Community College in Kansas. He posted 70 tackles, 10.5 sacks, 3 forced fumbles, and 2 fumble recoveries. He earned his First-Team Little All-American honors.

He transferred to the University of South Florida in Tampa, Florida.

He played 13 games for the Bull. He posted 45 tackles, 6.5 sacks, 1 interception, and 2 forced fumbles. He was named First-team All-American by Pro Football Weekly. He was also named to the first-team All-Big East.

He earned the nickname Haitian Sensation.

After his junior year, he decided to forgo his senior season and enter the 2010 NFL Draft.

He was named to the 2010 All-NFL Draft Team by Pro Football Rosters.

He became the first player in NFL history to record a sack, forced fumble, and blocked a field goal in the same game when he did so against the Dallas Cowboys on December 2011.

He was selected to his first Pro Bowl and was also named a First-Team All-Pro.

He helped the Giants to win Super Bowl XLVI against the New England Patriots by 21-17.

He underwent back surgery to remove a herniated disc in June 2013.

The New York Giants placed the franchise tag on Pierre-Paul in March 2015.

He suffered a serious hand injury in a fireworks accident at his home in July 2015. He had his right index finger amputated.

He turned down an offer from the Arizona Cardinals on March 2016 to remain with the New York Giants.

He underwent further surgery on his hand ahead of the 2016 season which allowed him to wear a glove instead of the cumbersome club which he wore in 2015.

He underwent surgery for a sports hernia in December 2016. He missed the rest of the season.

The Giants placed the franchise tag on him for the second time on February 2017.

He signed a 4-year deal with the Giants on March 2017 worth $62 million-plus $40 million guaranteed.

The Giants traded Pierre-Paul to the Tampa Bay Buccaneers in March 2018 for the third-round pick in the 2018 NFL Draft and a swap of fourth-round picks.

He tied the most consecutive games with at least 1 sack with 6 sacks. He tied with Simeon Rice.

He suffered a neck fracture in a single-car accident on May 2019. The injury could keep him out of the entire 2019 season.

Information about his relationship status is currently unavailable. He has maintained a low profile regarding his personal life. It will be updated soon.

What are Jason Pierre-Paul Body Measurements?

What is Jason Pierre-Paul Net Worth?

Jason Pierre-Paul earns from his professional NFL career. He was drafted by the New York Giants in 2010 signing a $20.05 million-plus $11.629 million guaranteed deal. He extended his contract with the Giants in 2017 signing $62 million deal plus $40 million guaranteed. His income comes from salary, wages, bonuses, endorsements, and sponsorships. His net worth is under evaluation.