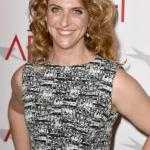 Jennie Snyder Urman is an American television producer. She has been involved in the production of several television programs including Hope & Faith, Gilmore Girls, Men in Trees, Lipstick Jungle, 90210, Emily Owens, M.D., Reign, Jane the Virgin, and Charmed.

Popular Jane The Virgin In Its Fifth and Final Season

Popular Romantic Comedy Drama American satirical romantic comedy-drama Jane the Virgin is in its final season. Its final season premiered on 27 March 2019. Jennie Snyder Urman is the showrunner, writer, and executive producers of the series. Gina Rodriguez is the main cast of the show who plays a young religious young Latina Jane Gloriana Villanueva. Jane the Virgin premiered its first season on The CW on 13 October 2014.

What is Jennie Snyder Urman Famous For?

- The showrunner of the comedy-drama, Jane the Virgin.

Where was Jennie Snyder Urman Born?

Jennie Snyder Urman was born on 6 June 1975. She was born in Rye, New York in the United States. She holds American nationality. Information about her parents and siblings are currently unavailable. Her zodiac sign is Gemini. She is of White ethnicity. She grew up in Rye, New York.

She attended Princeton University, where she graduated with a BA in English in 1999. She also acquired a Certificate in theater program while at Princeton.

She initially worked as a waitress in New York City.

She was looking for acting opportunities but she eventually gave up her acting ambition saying she was not thick-skinned enough or perhaps talented enough or wanted it enough as a career to be on screen.

Urman and her friend, Victoria Webster left New York City for Los Angeles to pursue a career writing for television.

She got her start in television writing in 2003. She started working as a staff writer on the ABC comedy Hope & Faith. She worked first as a writer, then as a story editor and finally the executive story editor in her 3-years work on Hope & Faith.

She was supervising producer of Lipstick Jungle and 90210. She was also the co-executive producer on 90210.

She was the creator, executive producer, and writer of a medical drama television series, Emily Owens, M.D.

She is the executive producer, showrunner, and writer of a satirical romantic comedy-drama, Jane the Virgin since 2014.  The show was inspired and adapted from Perla Farias' Venezuelan telenovela Juana la Virgen with a logline that reads "a girl gets artificially inseminated."

She is the executive producer and writer of fantasy drama television series, Charmed since 2018.

Who is Jennie Snyder Urman Married to?

Jennie Snyder Urman is a married woman. She is married to cinematographer Jamie Urman. The couple has 2 children together.

What is Jennie Snyder Urman's Net Worth?

Jennie Snyder Urman earns working in the entertainment industry not as an actor but as a writer and producer. Though she entered the industry to become an actress, she later felt she is not for acting and stepped into writing. As of 2019, her net worth is under evaluation.

Trivias About Jennie Snyder Urman You Need To Know.