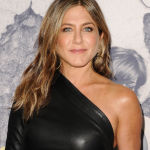 The American actress, film producer, and businessperson is Jennifer Joanna Aniston. She is professionally known as Jennifer Aniston. She has also been included in magazines' lists of the world's most beautiful women. In 2005, she became the first-ever "GQ Woman of the Year." In 2007, Forbes rated her as one of the top 20 richest women in entertainment. She was also included in the annual ‘Star Salary Top 10’ of trade magazine The Hollywood Reporter for 2006. In 2017, she was one of the highest-paid actresses.

In 2012, Aniston received a star on the Hollywood Walk of Fame.

Rumor and Gossip about Jennifer Aniston

The movie is based on a novel of the same name written by Julie Murphy. The movie is directed by Anne Fletcher and is distributed by Netflix. Music in the film is given by Dolly Parton. She has either written or recorded on all of the 12 soundtracks. Dumplin's lead actors, Jennifer Aniston and Daniele Macdonald are also featured on the soundtracks along with other artists.

What is Jennifer Aniston Famous For?

Who are Jennifer Aniston's parents?

Jennifer Aniston’s full name is Jennifer Joanna Aniston. She was born on 11 February 1969 in Sherman Oaks, California, the U.S. She was born to John Aniston who is a Greek-born actor, and Nancy Dow who is an American actress. She has two half-brothers named John Melick who is her older maternal half-brother and Alex Aniston who is her younger paternal half-brother. She holds American nationality and belongs to a white ethnic background.

At age of 11, at Waldorf School, she started her acting career. She graduated from Manhattan's Fiorello H. LaGuardia High School of Music & Art and Performing Arts.

Awards And Achievements of Jennifer Aniston

Whom was Jennifer Aniston married to?

The current marital status of Jennifer Aniston is divorce. Despite getting married twice, Jennifer's marriages have all failed. Firstly, she dated Charlie Schlatter in 1990. From 1995 to 1998 she dated Tate Donovan.

After that, she began dating popular actor Brad Pitt in 1998. After dating for two years, they tied a knot in 2000. Although they had been married for five years, they announced their split in 2005.

In 2011, she started dating Justin Theroux, a popular actor, screenwriter, and director. They got engaged on 10 August 2012 and married on 5 August 2015. But after two years of their marriage, the pair got divorced in 2017 and publicly announced it in February 2018.

How tall is Jennifer Aniston?

Jennifer Aniston is a hot and stunning actress with an appealing and endearing persona. She has an adorable appearance, with an amazing body physique.  She stands at a height of 1.64 m and her weight is 53 kg. Her eye color is blue and her hair color is blonde. Her body measurements are 34-23-35 inches. Overall she has a balanced and healthy body.

How much is Jennifer Aniston’s Net Worth?

Jennifer Aniston an exceptional actress has earned huge fame and success from appearing in numerous movies and television series. The net worth of Jennifer Aniston is estimated to be around $320 million as of now. She accumulated such wealth through a long acting career and several significant sponsorship deals. She also makes money through her production firms, which also work with other fashion and beauty brands.

Trivias About Jennifer Aniston You Need To Know.