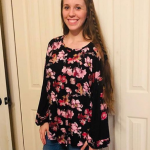 Jill Michelle Dillard is a popular American reality television personality. She is widely recognized for her role on the TLC reality television series 19 Kids and Counting. She appeared in the series along with her parents and 18 siblings for around seven-year from (2008-15). After that, the reality star featured on the spin-off of 19 Kids and counting, Jill & Jessa: Counting On from 2015-17.

Jill was born in Tonti town in the state of Arkansas. She possesses American nationality and ethnicity is North American.
Her birth name is Jill Michelle Dillard. She was born to parents, Jim Bob Duggar (father) and Michelle Ruark (mother). Jim is a real estate agent and father of 19 children. Jill grew up with as her other siblings. She had a rough childhood. It is because her brother molested her as a teenager.
Similarly, she hasn’t shared any information regarding her academic achievement or education until now.

A Career of Jill Duggar Dillard

Jill is a TV personality by profession. She became part of a reality show that includes her whole family. Jill became a famous figure in the media for her appearance in TLC reality television shows “19 Kids and Counting”. The show focuses on the life of a family including 19 kids. She featured on that show from 2008 to 2015. Afterward, she started appearing in another TV series, “Jill & Jessa: Counting On”. She is featuring in this show since 2016.
Additionally, she is also an author. She co-wrote a book with her sisters Jana, Jessa, and Jinger. Howards Books published the book and is named, “Growing up Duggar”.

Jill is a married woman as of now. She is married to Derick Dillard. The couple met through her father. Afterward, they fell in love with each other. The lovebirds started dating since November 2013. On March 29, 2014, she was proposed by Derick. And after a couple of months, the couple tied the knot on June 21, 2014.
Currently, they are living happily without any sign of divorce or separation. They have a child together named Israel Dillard born on April 6, 2015. Similarly, On July 8, 2017, the Dillard family welcomed 2nd son Samuel Scott Dillard.
In addition, She is active on Facebook, Instagram, and Twitter. She has more than 29k followers on Facebook, 1.6 million followers on Instagram and 206k followers on Twitter.

Jill has an average height of 5 feet 5 inches. Her eye color is blue and her hair color is brown. Additionally, there is no other information about her weight, and body measurements.

In June 2015, Dillard revealed on The Kelly File that her oldest brother Joshua Duggar used to molest her as a child. She said that her brother touched her inappropriately while she was asleep. She further added that she didn’t even know about her brother’s dirty deeds until he confessed to their parents.
Dillard shared with the host Megyn Kelly making the police report of the incident public was revictimization and the detail included in the report of her abuse might discourage other victims from seeking help.

Trivias About Jill Duggar Dillard You Need To Know.