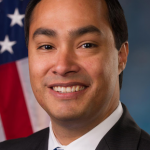 An American Democratic politician who has served in the United States House of Representatives for Texas's 20th congressional district since 2013 is named for Joaquin Castro. He serves as campaign chair for his identical twin brother, Julian, who is running for President in the 2020 election.

Rep. Joaquin Castro (D-TX) is under fire for tweeting out a list of donors to President Donald Trump. Why the maneuver is so controversial isn’t entirely clear: It’s all information that was already public. The Texas Democrat and brother to 2020 Democratic presidential candidate Julian Castro on Monday tweeted a list of 44 San Antonio donors who contributed the maximum amount under federal law to Trump in 2019. “Sad to see so many San Antonians as of 2019 maximum donors to Donald Trump,” he wrote, calling out a couple of the city’s better-known donors by their Twitter handles. “Their contributions are fueling a campaign of hate that labels Hispanic immigrants as ‘invaders.’” His tweet came after two mass shootings over the weekend in El Paso, Texas, and Dayton, Ohio, that left 31 people dead and dozens of others injured. The El Paso shooter reportedly targeted Latinx people and posted a manifesto online warning about a “Hispanic invasion” of the United States, mimicking the president’s language. Some observers-and not just those across the aisle-cried foul on Castro’s tweet, arguing that it unfairly put the spotlight on Trump donors and potentially put them in danger by publicizing their names and professions. “Targeting and harassing Americans because of their political beliefs is shameful and dangerous,” said House Minority Leader Kevin McCarthy, who blamed the weekend’s shootings on video games, in a tweet. “What happened to ‘When they go low, we go high?’ Or does that no longer matter when your brother is polling at 1%? Americans deserve better.” The hashtag #ImpeachJoaquinCastro began to spread on Twitter. President Trump reacted to Castro’s tweet on Wednesday evening, saying on Twitter that he didn’t know who the congressman was “other than the lesser brother of a failed presidential candidate.” In the original version of the tweet, Trump misspelled Rep. Castro’s first name.

Joaquin Castro was born on 16th September 1974 in San Antonio, Texas, the USA. He is the son of Jesse Guzman and Rosie Castro and the identical twin brother of Julian Castro, the former Mayor of San Antonio and the 16th United States Secretary of Housing and Urban Development in the Cabinet of President Barack Obama. He is one minute younger than Julian, being born at 2:41 AM and 2:40 AM respectively. His nationality is American and his ethnicity is White. His religion is Chrisitan. As of 2018, he celebrated his 44th birthday. He attended Thomas Jefferson High School. He graduated with honors from Stanford University with a Bachelor of Arts in political science and communications and earned a Juris Doctor with his twin brother at Harvard Law School in Cambridge, Massachusetts.

Joaquin Casto is a very handsome person with a nice attitude and personality. His skin color is white and he has got a very charming smile on his lips. At present, the exact height, weight, and other body measurements have not been revealed yet. Overall, he has got a very healthy body.

Joaquin is a married person. In early summer of 2013, Castro became engaged to his girlfriend, Anna Flores. The announcement was made by his twin brother, Julian, on his Facebook page. The couple had a daughter in 2013 and a son in 2016. The couple is living a happy life without any disturbances.

Net Worth of Joaquin Castro

Joaquin is a very successful person and his career has paid him a lot of fortune and earnings. At presents, the exact details regarding his net worth and salary are under review but it will be added soon once we got information. Overall, he is satisfied with his earnings.